Us Ambassador Resigned For "Threatening To Shoot Staff In The Head".

Gration often bragged about his close ties to the White House and to the president himself.

The impending release of a highly critical report by the State Department’s Inspector General’s office prompted the sudden resignation Friday of U.S. Ambassador to Kenya Scott Gration, according to administration and congressional sources.

The report was described to The Cable by multiple people briefed on its contents as one of the worst reviews of an ambassador’s performance written by the IG’s staff in several years. The bulk of the criticisms focused on Gration’s terrible relationship with embassy staff since he took over as ambassador in February 2011 following a controversial two-year stint as President Barack Obama’s special envoy for Sudan. The report is complete, but Gration still has the opportunity to write a formal response before the report is publicly released, these sources said. 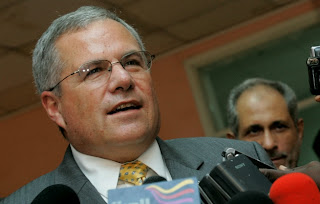 Gration, a retired Air Force general, was always a contentious figure inside the Obama administration. After becoming one of the first senior military figures to openly support and actively campaign for Obama in 2007, he was embraced by the team that would eventually form the president’s closest national security inner circle. Deputy National Security Advisor Denis McDonough once described Gration as one of the top three national security advisors to Obama, along with former Navy Secretary Richard Danzig and former Air Force Chief of Staff Gen. Merrill McPeak. He was rumored during the transition to be a candidate to lead NASA.

Gration’s roots in Africa run deep. He grew up in the Democratic Republic of the Congo and Kenya to missionary parents and speaks fluent Swahili. As Sudan envoy, he took a stance widely seen among activists as too solicitous to the Khartoum regime, focusing more on incentives than pressures — or, as  he infelicitously once described them, “cookies” and “gold stars.” That stance caused friction between Gration and other top Obama officials, especially U.N. ambassador Susan Rice.
By mid-2010, Gration’s relationships with various groups working on Sudan had also deteriorated, and by late in the year, Gration was lobbying internally to be appointed to the Kenya post, arguing that his years of ties to that country would serve him well. Following the reasonably successful January 2011 referendum that ratified Sudan’s split into two countries, Gration got his wish and was given the job he sought.
But Gration’s independent streak and insistence on doing things his own way, outside of the interagency policy process, ran afoul of the embassy staff in Nairobi almost immediately. Multiple sources familiar with the disputes confirmed reports Friday that Gration preferred to use his Gmail account for official business and set up private offices in his residence — and an embassy bathroom — to conduct business outside the purview of the embassy staff.
Other sources close to the embassy who worked with Gration related several anecdotes circulated by current and former embassy staff that are meant to highlight Gration’s erratic, controlling, and sometime bullying behavior.
Gration is said to have, upon entering the embassy, ordered that all heights of all the tables be adjusted and that all the clocks in the embassy be recalibrated, an indication of his eccentric style of micromanagement.
At one point in his battles with his new found employees, Gration told embassy staff he would “shoot them in the head” if they didn’t follow his instructions, and the staff formally complained about that remark, according to one unconfirmed account.
Gration often bragged about his close ties to the White House and to the president himself, although the White House stopped returning his phone calls after the IG’s investigation results became known inside the administration. Gration was twice disciplined by the State Department for making public statements that did not comport with administration policy, although the exact details of those statements is unclear.
E-mails sent to Gration’s State Department account seeking comment were not returned. The State Department declined to comment on the above allegations, but also declined to deny them.
Some in Washington had the perception that Gration was performing well as ambassador and maintained close ties to the Kenyan government leadership. Congressional aides said that they were waiting for the report and reserving judgment on Gration until all the facts became clear.
In his note announcing his resignation, Gration highlighted his differences with his Obama administration interlocutors. “Differences with Washington regarding my leadership style and certain priorities lead me to believe that it’s now time to leave,” Gration said.
For the community in Washington that follows U.S.-Kenya relations, the focus going forward should be on finding a new envoy who can hit the ground running, as Kenya’s political system faces severe risks in the wake of an explosion of ethnic and tribal violence following the December 2007 election.
Kenya is also in the front lines of the battle to stabilize Somalia, as the Kenyan military’s campaign to oust that country’s al Qaeda-linked al-Shabab militants from their southern stronghold has been met with fierce resistance and threats of terrorist retaliation.
“In light of the potential for violence in Kenya during the run-up to the 2013 national elections, and the challenges of sustaining full implementation of constitutional reform, we urge President Obama to immediately nominate a senior individual with deep conflict prevention expertise to replace Ambassador Scott Gration,” read a statement Friday by the Kenya Working Group, a team of experts organized by the Center for Strategic Studies and the Center for American Progress.
“The President’s nominee should understand Kenya’s complex history and the current political landscape – as well as that of the surrounding region. Given the crucial but delicate transition underway in Kenya, the nominee must also understand the critical role the U.S. government can play supporting Kenyan efforts to realize a successful democratic transition, and have the ability to work productively with all U.S. agencies and key international partners present in Kenya.”
Published by ForeignPolicy.com
Loading...
Museveni Accuses Raila Of Bribery, Rekindling Old Rivalry. < Previous
Lucy Kibaki Strikes Again. President’s Escort Commandant Fired For Letting Mary Wambui Meet Kibaki At Harambee House. Next >
Recommended stories you may like: