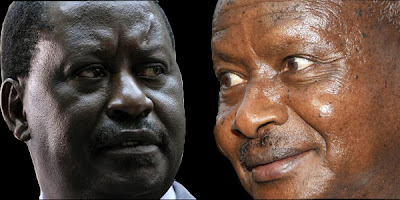 If you thought that the disagreements between Museveni and Raila were over, you are wrong. The two have had a long history of being frenemies. During the 2007 elections, Raila and ODM accused Museveni of assisting Kibaki to retain power illegally, using Ugandan forces. During the swearing in ceremony, both leaders deliberately ‘forgot’ the details of the other. Museveni did not recall the name of Raila’s party, despite mentioning PNU clearly. Raila on the other hand mentioned Museveni as the president of the republic of Tanzania. Months later, Museveni called Jaluos stupid.
The two seemed to have put their differences aside when Museveni invited Raila to his campaign rally, then Raila invited the President to an event in Kisumu and later to his home in Bondo. Then, media reports started surfacing that Museveni was secretly inviting Raila’s opponents to State House Kampala. Previous reports that the Ugandan was finally warming up to Raila were cast to doubt.
Now, there is one more reason to believe that the two have not settled issues. Ugandan newspaper, The Obeserver, is reporting that Museveni has accused Capt. Mike Mukula, a senior NRM figure, of receiving large amounts of money from Raila, to sabotage Museveni’s plans in the East African Legislative Assembly.

“I have intelligence reports that you received money from Raila to bribe delegates at Arusha. This is the same money Francis Babu used to bribe delegates from other East African countries to support the bid of his wife,” Museveni was quoted as having said during a meeting he called at his countryside home in Rwakitura, Kiruhura district.

The newspaper continues to say, “It is not clear yet at what stage Odinga picked interest in the election, but sources claim he wanted to humiliate Uganda. Eventually, the incident was a diplomatic embarrassment to Uganda in the region.”
Mukula denied receiving any money from Raila for any mission, but stated that the two were good friends.
© nairobiwire.com
Loading...
Capital FM Forced To Broadcast From OB Van Following Sorry State Of Studios. < Previous
Us Ambassador Resigned For "Threatening To Shoot Staff In The Head". Next >
Recommended stories you may like:

My Hustle – I Farm Worms and Make Worm Tea
Loading...
The Latest