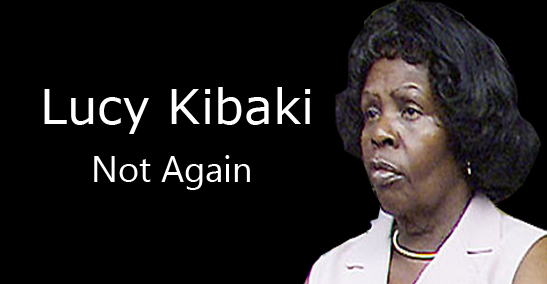 Kenyans have been wondering why the silence by first lady Lucy Kibaki. For many months, she has not been seen in public and she even missed her own brother’s funeral. That was uncharacteristic of Lucy during Kibaki’s first term, where she would accompany him everywhere. Events that happened last week now provide reasons to believe that Lucy is well in State House.
Over the years, Several people who have crossed the first lady’s path have been attacked mercilessly. Her Nation House ‘raid’ is still fresh in Kenyans minds. She decided to camp in their studios deep in the night awaiting the writer of an article portraying her in bad light. During the commotion, a KTN camera man received Lucy’s wrath when he decided to ‘take her photos’.
There was also a time she went shopping in a beauty shop in Nairobi’s Central Business District, attracting a huge crowd.
The late Prof. George Saitoti was also a recipient of Lucy’s wrath. When the late internal security minister told people to take the Sachangwan oil tragedy as a lesson, Lucy was blazing, wondering how dead people can learn a lesson.
There was a time Lucy failed to greet State House comptroller Matere Keriri, when her plane landed despite Keriri having his hand outstretched. Gitobu Imanyara has also experienced the first lady’s wrath, when he was slapped along the corridors of State House.
The one word that leaves Lucy fuming is Mary Wambui. Together with the president, Lucy came out on TV to declare she was the only wife of Mwai Kibaki. Kibaki said that he has only one dear wife. Paul Muite was this time on the receiving end.
At one time, Mary Wambui signed a condolence book as ‘Her excellency’. The next day, her state security was withdrawn.
During a Jamhuri Day’s State House ceremony, the presiding MC referred to Lucy Kibaki as Lucy Wambui. A furious Lucy rushed to the podium and gave him a good slap. TV Camera men were forced to delete that clip.
Mary Wambui is now at the center of another Lucy Kibaki classic fury. KISS TV is reporting that Presidential Escort Commandant, Kitili Mwendwa, has been relieved off duties after a confrontation with the first lady. The station said that Lucy was furious at the security chief for letting Mary Wambui meet Kibaki at his Harambee House office last week. It is not clear how Lucy got the info, but Kitili had no ‘reasonable’ explanation as to what the woman widely believed to be Kibaki’s second wife and safely assumed to be Lucy’s number 1 enemy was doing in Kibaki’s office. He tried to calm her but it amounted to nothing. He was banned from getting anywhere near State House.
Kitili spent Monday at Vigilance House, perhaps waiting for his next deployment. He was not part of Kibaki’s security detail that accompanied him to Burundi.
Additional Reporting By KISS TV.
© nairobiwire.com
Us Ambassador Resigned For "Threatening To Shoot Staff In The Head". < Previous
2 USIU Students Arrested For Kidnapping Fellow Students. Next >
Recommended stories you may like: