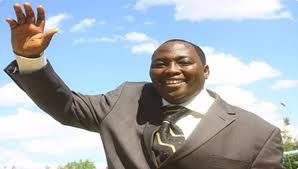 Just when Pastor Michael Njoroge of Fire Gospel Ministries is fighting accusations of being a fake, he pulls another one. Police say that the ‘Pastor’ might have stage managed a gun attack. They say he probably sprayed his own Toyota Prado with bullets.
Pastor Njoroge was recently all over the news after Esther Mwende, a sex worker, came out and confessed how the pastor paid her to fake an illness and the eventual healing. Instead of staying ‘underground’ and waiting for the situation to cool, Njoroge repeats the same mistake done by Kilome MP, Harun Mwau some time back.
Pastor Njoroge reported to the police that he was attacked by unknown gun men, who repeatedly shot at his vehicle. He said that he was present during the attack, the only difference between his story and that of Mwau.
Nairobi PPO, Anthony Kibuchi, has a different story however. “The impression on the vehicle’s doors are those made on a stationary target and not a moving vehicle,”he said.
The police added that going by the bullets’ entry and exit points, the vehicles occupants should have been shot.
Pastor Njoroge is a licenced firearm holder, and a ballistics examination will determine whether the firearm used to fire the bullets was his.
© nairobiwire.com
Fidel Odinga Wedding Pictures. < Previous
Day Samuel Wanjiru Carried Sh 24 Million In Plastic Bags. Next >
Recommended stories you may like: