“This is Ruto Speaking”. The statement that stunned the presenters. 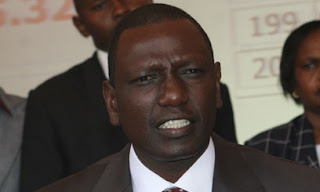 Eldoret North mp William Ruto today called Kass FM to cool down Cyrus Jirongo’s. The Lugari mp was being hosted for an interview in which he accused Ruto of dictatorial tendencies.Jirongo had lamented to Silas Tarus and Alex Tum of lack of democracy in URP.
‘We agreed to form the party. But it appears that we have had external interference,” Jirongo said, suggesting claims that Mudavadi is been sponsored by persons in the government. He also accused Ruto of not taking the wheel at URP. He said that the Eldoret North mp has not convened any party meeting for a long time.
”Ruto has been mum. We have not spoken in one month, although we are friendly when we meet. He has not called a meeting of the party. We have not known what has been going on,” Jirongo said.
Towards the final minutes of the interview, Ruto called in and told Jirongo it would have been better had he not washed their dirty linen in public. He also told him to join him for a meeting after the interview.
”This is William Ruto,” the MP said when the presenters of the breakfast show today picked the call. ”I want to tell Honourable Jirongo that we should have discussed the issues instead of going public with them. Anyway, just wind up the programme and come we talk,” Ruto said in the brief call.
© The jackal news/nairobiwire.com
Camp Mulla’s Taio Tripper Turns 19. < Previous
REVEALED: Why Safaricom Gave 50% Bonus On Madaraka Day. Next >
Recommended stories you may like: