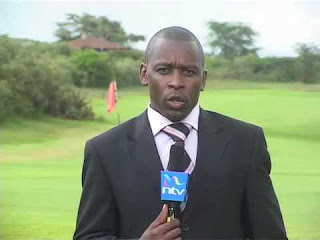 Reports on social media are that NTV senior reporter, Richard Chacha is paralyzed from the waist down. The reporter has been admitted at Nairobi hospital since the tragic accident some time back in the company of Emmanuel Taalam, Linus Kaikai, NMG’s Ephantus Mwangi and Frida Kirema. Chacha received most of the impact and was left unconscious. He was airlifted to Nairobi together with Emmanuel Talam and Linus Kaikai. The others were taken to hospital by road since their injuries were not severe.

UPDATE:
Following conversations of some of Chacha’s workmates, the reporter is not paralyzed but is still admitted at Nairobi hospital. He is said to be responding well to medication and will be out soon.

While responding to a fan, @SmritiVidyarthi tweeted, “He was in an accident but is not paralyzed. He is recovering well.”
Dennis Onsarigo also tweeted, “Just seen Richard Chacha. The guy is fine. He thanks you all for your prayers”.
Nairobiwire really hope he is doing fine and wish him quick recovery.

© nairobiwire.com
REVEALED: Why Safaricom Gave 50% Bonus On Madaraka Day. < Previous
Raila Odinga Likes This. (Facebook humour.) Next >
Recommended stories you may like: