Woman Says He Stabbed Her After An Argument 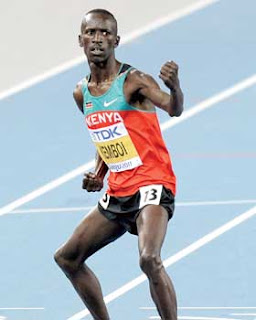 Olympics gold medalist has been accused of stabbing a 26 year old woman in Eldoret on Wednesday night. The alleged victim, Ann Njeri, told police that they had been drinking at a pub with Kemboi before he offered to drop her at her home in the outskirts of the town.
She continued to say that they differed and argued before she got home and that’s when the athlete stabbed her on the left side of the chest. Ann is now admitted at Med Heal hospital in Eldoret. Kemboi, according to the police, presented himself to the station and claimed that he had been attacked. Police have started investigations according to Rift Valley police boss, Francis Munyambu.
Kemboi, who won gold in the Athens Olympics 3,000 m steeplechase, booked his place in this years London Olympics where he promised to show us another version of his ‘Pamela Chepchumba’ dance.
Olympics management team is yet to confirm whether Kemboi will still represent Kenya.
© nairobiwire.com
Jaguar And Mike Rua Slam Kamande wa Kioi, De Mathew And Muigai For Their Music. < Previous
The Miserable Lives Of Kibaki’s Presidential Guards. (SHOCKING) Next >
Recommended stories you may like: