Quick advice, people like watching you, not listening to you. 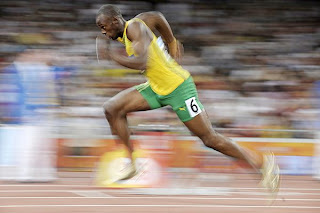 The world fastest man needs to go faster than lightning. That’s Usain Bolts title for his new song, ‘Faster Than Lightning’.
The song contains Bolt’s auto tuned voice explaining how he keeps winning. He says, ” when I get to top speed, I turn on the afterburners, I listen to the crowd getting loud”. Going by the song, it would be better if Bolt concentrates on sprinting. As a yahoo reporter put it, the video is neither unintentionally hilarious nor intentionally amusing. Thus, it’s instantly forgettable.
Here is the song.
© nairobiwire.com
Funny Or Die? Amazing Video. < Previous
Bonny Khalwale On The Loose. Next >
Recommended stories you may like: