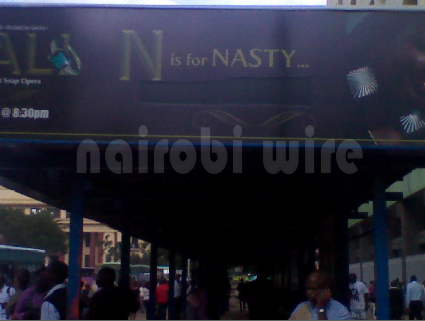 When  NTV launched Mali, they branded the bus stop at Kencom with their colours. They also advertised on billboards around Nairobi, showing they meant business in their bid to dethrone Citizen its position on prime time TV. The advert at Kencom has however been controversial because of a statement it had. The statement read, “N is for NASTY…Just like NANDI.”

Nandi is a selfish and arrogant character on the soap. This led to some people claiming that the Nandi people were been ‘targeted’. One email sent to Nation Media group and copied to NCIS read, “…We urge you to pull down the advert immediately. Failure to do so will be deemed as ethnic harassment and promotion of collective condemnation of the Nandi People, their language and culture as NASTY.”

Another read, “Whether its intentional or not, the advert …for sure is offensive, insultive (sic) and uncalled for. It is also discriminatory in a manner likely to influence the minds of other Kenyans and international visitors to view the Nandi in a negative way. We look forward for your kind response and action in this regard, thank you.”
Contacted, Allison Ngibuini, the show’s producer reacted by saying, “This shocked me, because I have never ever thought of it like that. It goes to show the sensitive political space the country is in. Something is wrong. We all need to heal.”
The ‘just like Nandi’ part of the advert has however been peeled off, as shown on the picture above.
© nairobiwire.com
Alpha Of TPF, Hangs Out With Brandy’s Brother Ray J. < Previous
Video Of Prezzo Telling Barbz To Get Impregnated Goes Viral. Next >
Recommended stories you may like:
How to Play HollywoodBets and Earn Money
Email Marketing in 2021: Is It Still Effective?
Olive Burrows: Kirubi Said He Doesn’t Hire Fat People
CRAZY: Funny Pics/Memes Going Viral on Kenyan Social Media