The DJ has appealed to fellow DJ’s to report if anyone tries to sell to them DJ equipment. 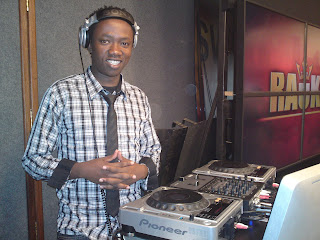 Citizen TV’s DJ, Johnie Celeb is an angry man after his house was swept clean during the day. Among the things stolen were a mac book computer and computer hard disks,other electronics and most importantly DJ equipment, namely a brand new mixer and turntables. His big TV proved too bulky for the robbers to carry, as they left it untouched.
DJ Johnie, who lives on the 3rd floor of an apartment in South B, is not ruling out an inside job. Chief suspects are a caretaker and a watchman. Funny enough, the thieves had enough time to go through his cutlery and select the best.
The devastated DJ has reported the theft to the police and has appealed to fellow DJ’s to report if anyone tries to sell to them DJ equipment.
© nairobiwire.com
Generous Mike Sonko Buys Revelers Beer Worth SH 250,000 < Previous
Grass Eating Man Causes Traffic Jam In Naivasha. Next >
Recommended stories you may like: