RMS Also Has, Pata Pata, Kyondo Mwita and Kanya Kanya, among others. 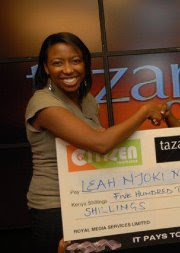 As much as you hate the way she dresses, Shiku Kaittany is back on your TV screens with another season of Tazama Chapaa. Yet again, Kenyans are making SK Macharia a billion shillings richer and as his way of saying thank you, he bribes a few individuals with sh 500,000. First there was Zawadi 2929, then came Tazama Chapaa, then another season and God knows when they will stop. Without beating around the bush, how much do you think SK is making with everyday?
Kenya has about 20 million mobile subscribers. Eliminating school going children, people with more than one active line, people with multiple inactive lines and the ever broke persons (the okoa jahazi type), Kenya has about 10 million mobile subscribers. Out of these, 8 million have heard of Royal Media’s money ‘giveaways’, and am talking of Citizen TV’s Tazama Chapaa, Radio Citizen’s ‘Pata pata’, Inooro fm’s ‘Kanya kanya’, Musyi fm’s ‘Kyondo Mwita’ and we can continue till we cover all RMS’ radio stations. Out of this number, 5 million have participated in either one of them. Out of the 5 million, 2.5 million are regular participants of Tazama Chapaa. By regular, lets go with participating twice a week.
Going by these figures which may be grossly on the lower side, around 5 million text messages are sent every week, to 8028. One sms is charged sh 25. Without being a mathematics genie, that translates to 125 million shillings every week. Running such a competition comes with various expenses. Safaricom and other mobile providers must take a very big share, there is the issue of licenses, there is a percentage that must go to charity, the short code charges, advertising etc. Assuming after everything, Royal Media keeps a fair 20%, they are left sh 25 million every week.
The winners have to be rewarded. Sh 500,000 every day translates to a meager 3.5 million shillings a week. Subtract that from the 25 million and you are left with 21.5 million (lets say 20 million).
This continues for 3 months, each month having 4 weeks. That makes 12 weeks.
20 million shillings every week for 12 weeks makes SK Macharia 240 million shillings. That’s a quarter a billion shillings. When Citizen does this 3 times a year, that’s 720 million. When the income from ‘kanya kanya’, ‘pata pata’, ‘kyondo mwita’ and the likes is brought on the table, SK Macharia makes at least 1 billion shillings a year. Do not forget that this is not his main business. There is still advertising on his stations which make him much more.
© nairobiwire.com
What Are Jacob Zuma’s Genitals Doing In The Open. < Previous
Was Atwoli Bribed To Oppose NHIF Scheme? (Leaked Recording) Next >
Recommended stories you may like: