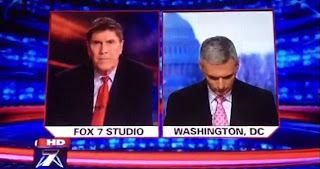 A Fox reporter was caught sleeping on his job, literally, during Super Tuesday. The other presenter introduced Doug Luzader, who was at the capital, Washington DC, to provide more updates on the republican presidential nominations. Everything was set and the live video stream was in action, but Duog was not ready. He was so asleep that numerous attempts to wake him up fell on deaf ears.
This was the intro that went unanswered.

‘Doug Luzader is live at the scene with an update on all of this. Doug, good morning, good to see you. I guess six, three, one is pretty much the way it breaks down?’

The live stream had to be abandoned.


Here is the video.