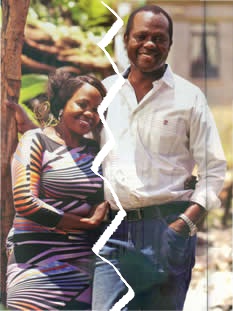 Raphael Tuju is just riding on the publicity brought about by his bid to vie for the presidency, but even before he breaks the 2% opinion polls ranking, he already has issues with his first lady. Apparently, the POA presidential candidate caught his wife cheating on him. He is said to have had his suspicions before hiring a private detective who did his job perfectly and even presented his client photographic evidence.

Tuju confronted his wife and what happened during the confrontation, unless told to you by Tuju or his wife is gossip. However, his wife is not one to let things slide away easy. She also had her suspicions on who tipped her husband. She narrowed down one lady, had her allegedly kidnapped but it all backfired when authorities were also tipped. Police ‘ rescued the woman’ and the rest is history. Tuju’s wife was put behind bars and now Tuju has been up and down fighting for the release of her ‘dear’ wife.Perhaps to protect his image as a family man with a palatial family home.

Why does the Kenyan media shy away from such big stories involving big people? Remember Eugene Wamalwa was recently evicted from his house and no media station mentioned it.

Oprah Winfrey To Interview Bobbi Kristina. < Previous
Andre Villas-Boas Sacked As Chelsea’s Manager. Next >
Recommended stories you may like: