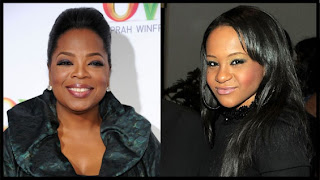 Oprah Winfrey has landed an exclusive interview with Whitney Houston’s daughter Bobbi Kristina. The interview will be aired on ‘ Oprah’s Next Chapter’, on her own OWN Network on Sunday, March 11 at 9 p.m. In addition Oprah will speak to Houston’s sister-in-law and manager Patricia Houston, and brother Gary Houston.

Before the interview, OWN will re-air its special, ‘remembering Whitney’ featuring the late singers 2009 interview on Oprah Winfrey show. The initial airing of the special brought in brought in 830,000 viewers. OWN had initially struggled with rating but is seeing a reverse in that of late.

Internet Services Cut Off At The Pentagon. < Previous
Raphael Tuju’s Wife Accused of Kidnap And Murder. Next >
Recommended stories you may like:
How Koffi Olomide Thrilled Fans at Koroga Festival – PHOTOS
TALENT KNOWS NO AGE! Meet the Young Kenyan Boy With Sick ‘Deejay-ing’ Skills – VIDEO
HAHAHA! This Chic Will Crack You Up With Her Crazy Mash-Up Of Kenyan Hits – VIDEO
OOH NO! This Kenyan Remix Of ‘Versace’ Will Have You Apologising to Migos For Killing His Hit – VIDEO