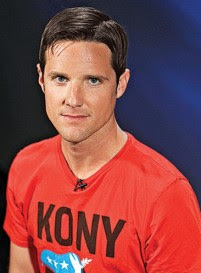 “Jason Russell was unfortunately hospitalized yesterday suffering from exhaustion, dehydration, and malnutrition. He is now receiving medical care and is focused on getting better. The past two weeks have taken a severe emotional toll on all of us, Jason especially, and that toll manifested itself in an unfortunate incident yesterday. Jason’s passion and his work have done so much to help so many, and we are devastated to see him dealing with this personal health issue. We will always love and support Jason, and we ask that you give his entire family privacy during this difficult time.”

Russel is a father of two, including the small kid featured in the Kony 2012 documentary.

And now this exclusive video by TMZ.

Kenyans Peculiar Habits. < Previous
Kenya Elections On 4th March 2013. Next >
Recommended stories you may like: