Kiema Kilonzo, Why I Will Never Support Kalonzo. 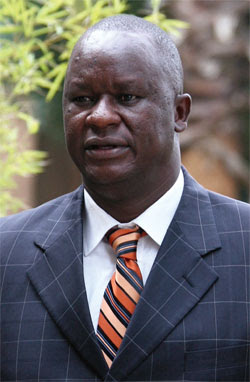 MUTITU MP Kiema Kilonzo has declared he will not support Vice President Kalonzo Musyoka’s presidential bid though they hail from the same county. Kiema said the VP is an ungrateful and selfish leader who does not appreciate any support accorded him. He recalled that he gave his all to manage Kalonzo’s 2007 presidential campaign but the latter ungraciously dumped and forgot him once he was appointed VP. “It is in the public domain that I did virtually everything and personally coordinated his presidential campaign in 2007. I used friends to even mobilise campaign money. He forgot all the people who supported him including myself when he became VP. I have learned a bitter lesson,” Kiema said.
The MP said he expected Kalonzo to appreciate his support through a ministerial appointment. He said highly qualified professionals who financially supported Kalonzo should also have benefited from government jobs. The MP was speaking to residents of the Nzawa village in Nguutani division of Migwani district in Mwingi South constituency on Sunday during the sixth memorial anniversary of the daughter of his friend Muinde Muvea. Muvea’s daughter, Damaris Katile, died in 2004. The mass was presided by Catholic priest Nicholas Maanzo. Kiema, who is aspiring for Kitui governorship, urged residents to use their voting power to reject non-performing leaders who have presided over underdevelopment in the area.
He urged the residents to stop complaining that MPs have failed them but to simply vote them out of office. He said it is prudent for area voters to install or retain leaders with a proven development track record like him. “You have the absolute power to elect leaders who will ensure development and uplift your living standards. Use your votes to reject leaders who have let you down by failing to initiate or have even frustrated local development initiatives,” Kiema said.
He said he is the best bet for the Kitui governor’s position as he has always practised an open door style of leadership and has championed the interests of ordinary citizens both outside and inside Parliament. He cited a recent case in which he raised the issue of the failure by the IEBC to create Mwingi Central constituency as per the wishes of area residents. After the gathering assured him by a show of  hands that they will not only pray for him to win the seat but also mobilise support for him, he said if elected he will serve them without fear or favour. He said he will ensure equitable development and distribution of resources.
Article by The star

Crocodile Chews Man’s Buttocks In Uganda. < Previous
Tesco’s Wrongly Sells iPads For A Tenth The Price. Next >
Recommended stories you may like: