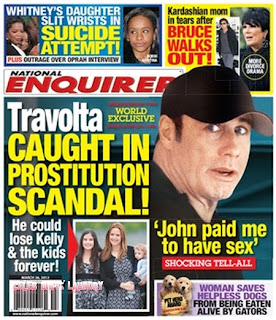 John Travolta is alleged to be involved in another gay sex scandal. According to National Enquirer, Travolta contacted a male massage therapist anonymously on Craigslist, took him to Beverly Hilton hotel and paid him $200 an hour to have sex with him. The man still remains anonymous, but passed this message to National Enquirer.
“He tried to pay me for sex – it was very clear that John Travolta wanted me to perform a sexual act on him and that he would pay me to do it.”
The therapist resisted any sexual approaches but Travolta continued to seduce him, at one point suggesting a threesome.
This is not time John Travolta has been accused of engaging in homosexual activity. Claims that he is gay have haunted him since the 1980’s but he has always denied them.
Nyambane Denies Resignation Claims. < Previous
Woman Gets A Kicking From An Angry Cow (VIDEO) Next >
Recommended stories you may like: