Just when Thika Road is about to be completed, some people have already embarked on an operation to deface it. With flyovers never again seen in East Africa, Thika road should be a marvel to the eye, but not anymore.

The flyover at Githurai is the arguably ugliest place in the whole of Nairobi. A few months after it was opened to the public, the place is full of all forms of advertisement posters, most of which have partly peeled off leaving a hell of a disaster. Beneath the flyover, is a brand new market. Hawkers have literally put their goods on the tarmac, blocking about 50% of it.

If you thought the crusades, campaign and advertisement posters at Githurai are bad, try those at Kahawa Sukari flyover. The same is replicated on almost every flyover along the brand new highway. 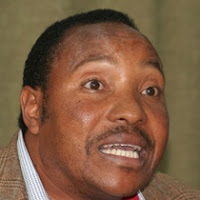 For the past several days now, there has been another operation to deface Thika road. You do not need to be hawk eyed for you to see the huge writings on the walls of flyovers and their pillars campaigning for Ferdinand Waititu for the post of Nairobi County governor. The spray painters have made sure to paint as many flyover pillars /wall as they can. Starting from Kahawa, Githurai, Kasarani, Allsops and everywhere else. Unlike posters, spray paint will take a long time to be fully erased. It is very unfortunate that a person seeking to be the governor of Nairobi, is the one destroying the image of this city. As we enter the election period, Thika road will be one ugly place to look at if such behaviour by Ferdinad Waititu goes unpunished. Every politician will want to have the biggest writings on the wall. Before it’s too late, #STOP WAITITU 2012.

Comedian Nyambane Resigns From KBC. < Previous
Crocodile Chews Man’s Buttocks In Uganda. Next >
Recommended stories you may like: