Granny Appears On 3 Quiz Shows In 2 Weeks & Wins Nothing. 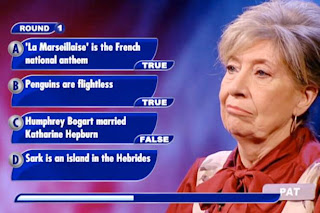 Pat Baker, a 68 year old granny appeared in 3 TV quiz shows in 2 weeks and won nothing. First was  Pointless airing on BBC1 on February 1, where she and her son went all the way to the finals, only to lose.Then last week she failed to impress on BBC2 quiz Perfection. Then come Friday and she’s on Mastermind, another quiz show, and it’s same story different show. Terming it one hell of a coincidence, the granny said that the 3 shows were all filmed at different times last year and that she was assured that they would not be aired at the same time.

“I was absolutely assured that there was no chance in the world that they would all be on at the same time. I think it’s hilarious.”

All the shows were for the BBC but the media giant refused to comment.

Was Whitney Houston Gay? < Previous
The Top 10 Airlines For Best In-Flight food. Next >
Recommended stories you may like: