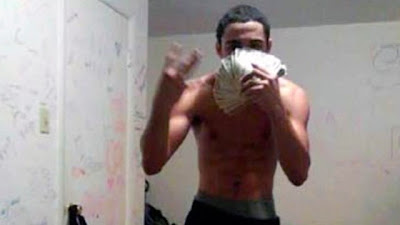 Police in Pittsburgh refused to like a photo of a man on Facebook. Isaiah Cutler, 18, posted a picture of him and his loot on the social networking site. Police say Cutler and two other accomplices stole more than $8,000 worth of cash, cigarettes and candy from a business.One hour later, the dumb kid posted a picture of him and the loot on Facebook and police were not amused.
The younger suspects have been charged in juvenile court and have been released to their parents. Cutler was not lucky though as he is over the legal age.

Zimbabwean Man Orders A Prostitute, His Daughter Arrives < Previous
Nicki Minaj Buys Sarafee A Red Bentley Next >
Recommended stories you may like: