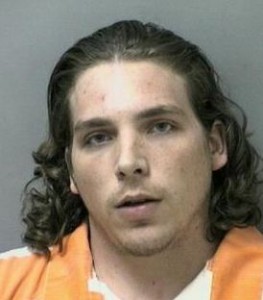 A man who is currently serving a sentence of 11 years is suing a couple he at one time held hostage, for failure to  respect an oral contract they had made with him.

Jesse Dimmick  burst into the home of Jared and Lindsay in Topeka 2 years ago as he was fleeing from authorities. He reportedly negotiated an exit strategy with the couple where the couple was to hide him in their house and he would pay them an unspecified amount of money. According to neighbours, the three shared snacks and watched movies together while Jesse was supposedly holding them hostage. Soon, Jesse would fall asleep and the couple did not honour their part of the deal as they sneaked out and called 911.

The kidnapper is suing them for $235,000 which he says covers the hospital charges he incurred as a result of being shot by the police as he tried to escape. The couple, on the other hand, is counter suing Jesse for $75,000 for breaking into their house and the stressing experience they had to go through.

Stretch Ferrari Parked Outside London Shop < Previous
Remember Obama Girl, Now There Is Agwambo Girl Next >
Recommended stories you may like: