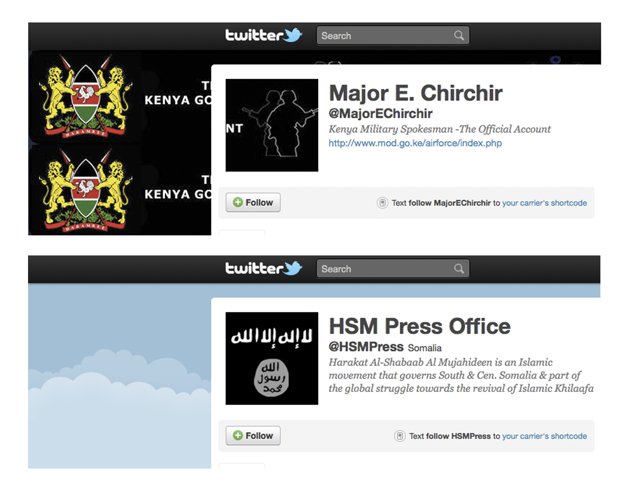 NAIROBI, Kenya (AP) — Kenyan soldiers and members of an extremist Islamist militant group have been fighting each other in Somalia since Kenya invaded two months ago. Now, their spokesmen are taking the battle onto Twitter, with taunts, accusations and insults being directly traded in a rare engagement on the Internet.

The propaganda war on the micro-blogging website shows the increasingly sophisticated use of media by both sides and underscores that there is often little reliable information about the conflict in Somalia that now directly or indirectly involves a half-dozen nations, analysts say.
“The tweets themselves will not be entirely accurate but it will allow analysts to triangulate that information and come up with a more accurate picture of what is really happening,” said E.J. Hogendoorn of the International Crisis Group think tank.
On Monday, the Islamic insurgent group al-Shabab used its Twitter feed to accuse Kenya of having a history of committing “barbarous acts” toward ethnic Somalis, and cited a 1984 massacre where human rights groups say Kenyan troops killed around 3,000 ethnic Somali men in eastern Kenya.
Addressing more recent actions, al-Shabab’s tweets that began last week claimed that Kenyan soldiers in Somalia “flee from confrontation & flinch in the face of death.” The Twitter feed also described al-Shabab’s own press release giving details about Burundian soldiers killed in an October battle between African Union peacekeeping troops and the insurgents. Al-Shabab claimed to have killed more than 150 AU troops at the time.
The AU only reported 10 casualties although Mogadishu-based security sources say the figure was closer to 70.
Al-Shabab’s tweets, written in fluent English, mocked an earlier Twitter posting by Kenya’s army spokesman, Maj. Emmanuel Chirchir, that threatened to bomb concentrations of donkeys that might be moving weapons for the insurgents.
“Your eccentric battle strategy has got animal rights groups quite concerned, Major,” the al-Shabab posting said.
The Associated Press has determined that both Twitter accounts — HSMPress and MajorEChirchir — are legitimate. It’s not clear who is writing the al-Shabab tweets. Several Americans, most of Somali descent, have in recent years joined the group that Washington has designated a terrorist organization.
Chirchir has responded with his own barrage of tweets.
“With Al Shabaab joining tweeter, lets take fight to their doorstep,” he wrote. Chirchir accused al-Shabab of stoning an innocent girl to death and chopping off hands. He noted that many commanders have banned bras in their territory, and urged readers to retweet the message in support of Somali women.
Al-Shabab, which is fighting the weak U.N.-backed Somali government and controls much of southern Somalia, follows strict Shariah law and has carried out amputations and executions, including stoning to death a girl who Amnesty International said was a 13-year-old rape victim. It also enforces a strict dress code, flogging women whose robes it deems are not thick enough.
Kenyan human rights activist Hassan Omar Hassan says the flurry of tweets obscures the paucity of information about actual operations by the Kenyan military since it entered Somalia in October. Kenyan leaders have not said how long the intervention might last or what the ultimate goals are.
“To make an honest judgment about the war, Kenyans need more accuracy in war reporting,” said Hassan. “We don’t know the full story … the government has been able to circumvent accountability.”
The military originally portrayed the incursion as a short mission sparked by the kidnappings of foreigners in Kenya, near the Somali border. But Kenya has been pushing for the establishment of a buffer state along its border with war-ravaged Somalia for many years.
Last week, Kenya’s parliament approved a plan to eventually place the Kenyan troops under the command of African Union forces in the Somali capital, indicating that Kenyan forces could remain in Somalia for a long time. The plan has not yet been approved by the U.N. or donors funding the AU force.
Analysts say if al-Shabab tweets timely, accurate information about events it may force more disclosures from Kenyan and African Union military authorities. But al-Shabab has already allegedly exaggerated the numbers of wounded civilians and its military victories.
On Saturday, al-Shabab tweeted that Kenyan jets had bombed a Red Cross feeding center in the town of Bardhere, with scores of women and children injured.
A day later, the Red Cross confirmed their center was hit, but said there were no casualties because it was empty at the time.
Nicki Minaj New Pink Bentley < Previous
Chris Brown hanging Out With Ex And Current Girlfriend In Dubai. Next >
Recommended stories you may like: