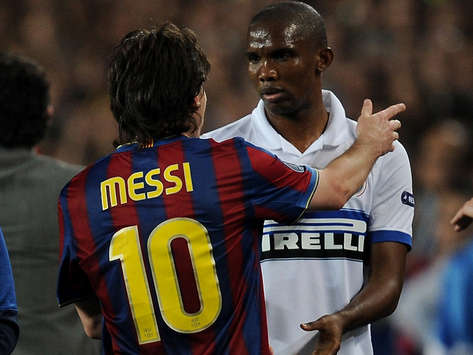 “Why not Leo?” Eto’o. “Here, nothing is impossible.

The 30-year-old striker made waves in the summer when he decided to leave Serie A giants Inter in order to join the big-spending side and the former Barca striker is now reportedly the world’s highest-earning player.

Eto’o expects that many more big names will follow him to Russia in the near future, claiming that his side now has the pulling power to attract the very best.

“Lots of players call me,” he told France Football. “You would be surprised at their names.

“A few years ago, when a player was having difficulties with his club, they would be linked with Chelsea. Now, they are linked with Anzhi,” Eto’o said.

A move for Messi would seem unlikely, given the Argentine’s repeated commitment to Barca, but Eto’o says anything is possible at his ambitious new club.

“The owner [Suleyman Kerimov] can buy who he likes, although the player must also want to come here – and that is one of his missions,” said Eto’o.

“I just reply to players who want to know about it here and give some clues to the owners from time to time.”

“Messi is obligatory,” he said. “[I would also have] Xavi and Iniesta, because they play great football, and Ronaldinho for his magic.”

Its Official, Usher And Keri Hilson NOT Coming To Nairobi. < Previous
Succeeding Mourinho is Very Difficult, Inter CEO Next >
Recommended stories you may like: