NYPD Releases Westgate Report… Only 4 Shooters & They May Have Escaped 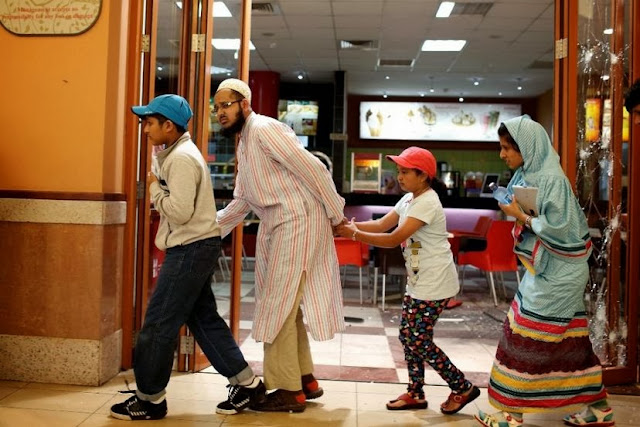 New York Police Department has released a report on September’s Westgate attack. The respected police authority has also rubished claims that the terrorists were holding and torturing hostages as had been claimed in various news reports.
More than 60 civilians and six soldiers died in the Sept. 21 assault by terrorists from the al Qaeda-affiliated group al Shabaab on the Westgate Mall in Nairobi. After a two-day siege and a series of explosions, Kenyan authorities said they had cleared the mall and killed four attackers.

At a Manhattan press conference Tuesday morning, New York Police Commissioner Ray Kelly said investigators didn’t know “with certainty” how many people were involved, “but we believe there were only four shooters.”
The NYPD report also said the attackers carried only light weapons, and that there is no evidence any of them tried to take hostages or remained in the mall after 12:15 a.m. on Sept. 22.
It also said the female British jihadi known as the “White Widow” was probably never in the mall, despite tabloid rumors, and that the Kenyan military looted the high-end shopping complex.
Lt. Detective Commander Kevin Yorke, who prepared and presented the report, also questioned the Kenyan authorities’ theory that the attackers died when explosions collapsed portions of the mall.
“As a cop, I’m very skeptical of claims until I see proof,” said Yorke, and added that  there is “a lot of doubt in my mind it is true.”
The NYPD sent several detectives to Nairobi with the New York Joint Terrorism Task Force to investigate the assault, and Yorke assembled their findings into the report.
According to the NYPD’s reconstruction of events, the four attackers operated in two-man teams and coordinated their movements by cellphone. After throwing three grenades and entering the mall, they used AK-47s in single-fire mode to shoot their victims. More than one-third of the dead were attending a children’s cooking contest that was being held in tents in the mall’s roof parking lot. The attackers killed them within 15 minutes of arriving at the mall.
The report said the attackers had grenades and several hundred bullets in eight magazines, but no body armor, handguns or heavy weapons. They did not try to take hostages, but killed as many victims as they could, sparing some who could recite Muslim prayers or name the Prophet Mohammed’s mother. A Russian hand grenade was found on the roof with the pin removed but unexploded.
The NYPD report credits private security guards and personnel with clearing many people from the mall, though some may have fired on each other since they didn’t use badges. Some civilians “played dead” as the terrorists walked past, while others who tried to hide, many in small stores, were shot dead.

Kenyan law enforcement initially thought they were responding to an armed robbery at the mall. The first Kenyan tactical team didn’t arrive until 1:45 p.m., about 90 minutes after the attack began, and the Kenyan police commissioner arrived at 1:50 p.m.

According to the NYPD report, the responding Kenyans “had no idea what the mall looked like internally,” and didn’t know they could access the closed circuit television system.
One terrorist was shot in the leg. The shooters tilted or destroyed cameras in order to hide their whereabouts. By 6 p.m. they were in a mall storeroom near the loading docks, and waited there for six hours, tending their wounded comrade and praying. They can no longer be seen on closed circuit footage after 12:15 p.m., when the NYPD believes they slipped away.
Yorke said that while the Kenyan military may not have killed any of the attackers, there was “significant” physical and video evidence that they had looted the mall.