How To Detect Fake Kenyan Currency 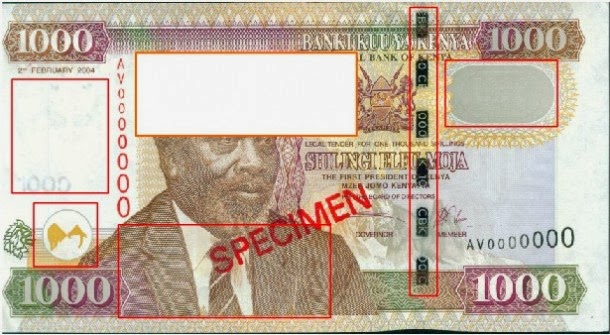 Counterfeits are a threat to the circulation of genuine Kenyan currency.
Security features in currency notes act as a deterrent and safeguard to minimise the risk of counterfeiting. We encourage the public to be aware of the available security features incorporated in genuine currency notes and to be able to distinguish between genuine and fake notes.
Each genuine banknote incorporates a number of security features which makes the counterfeiting of the currency notes extremely difficult. The following are public security features to be checked by each member of the public.
– Central Bank of Kenya
Loading...
Traffic Cameras Go Live in Nairobi < Previous
VIDEO – Safaricom Releases New Amazing Advert Featuring Stunning Shots of Thika Superhighway Next >
Recommended stories you may like: