Floyd Mayweather Made At least Sh3.5 Billion From His Saturday Fight 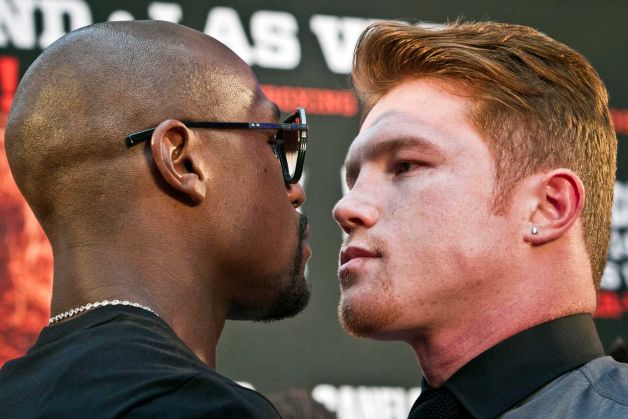 LAS VEGAS, Nev. – Canelo Alvarez proved nothing more than easy money for Floyd Mayweather Jr.
Mayweather turned one of the richest fights ever into just another $41.5 million payday Saturday night, dominating Alvarez from the opening bell and winning a majority decision in a masterful performance that left no doubt who the best fighter of his era is.
Fighting off his shortest layoff in years, Mayweather was sharp, efficient and sometimes brutal in dismantling an unbeaten fighter who was bigger and was supposed to punch harder. He frustrated Alvarez early, pounded him with big right hands in the middle rounds, and made him look just like he said he would — like any other opponent.
Mayweather was favoured 117-111 and 116-112 on two ringside scorecards while a third inexplicably had the fight 114-114. The Associated Press scored it 119-109 for Mayweather.
“I just listened to my corner, listened to my dad,” Mayweather said. “My dad had a brilliant game plan, and I went out there and got the job done.”
Mayweather remained unbeaten in 45 fights and added another piece of the junior middleweight title to his collection in a fight that was fought at a 152-pound limit. Alvarez weighed in at that weight, but was an unofficial 165 pounds when he got into the ring while Mayweather, who weighed in at 150 1/2 pounds, was an even 150.
The extra weight did Alvarez no good and the punching power that brought him 30 knockouts in 43 fights wasn’t a help either. The Mexican star was seldom able to land a solid punch, with most of his punches either missing or glancing off of Mayweather.
“No doubt he’s a great fighter, a very intelligent fighter,” Alvarez said. “There was no solution for him.”
Mayweather said he actually had to put on weight during the day to even get close to what he weighed the day before.
“When I woke up this morning, I was 146 pounds, so I had to call my chef and get something in my system,” he said.
Mayweather’s speed was the difference all night as he was able to land straight rights and left jabs, then get out of the way before Alvarez was able to respond. But while Mayweather used great defence, he wasn’t afraid to attack often and at different angles, finding Alvarez with punches he couldn’t anticipate.
“He’s very talented, very elusive,” Alvarez said.
When it was over, Mayweather didn’t even celebrate, walking over to a corner to look at the crowd. Just another payday, just another win for Money May. The only surprise came when it was announced the decision wasn’t unanimous, with judge C.J. Ross scoring it even.
“I can’t control what the judges do,” Mayweather said.
Alvarez was supposed to be Mayweather’s greatest challenge and he did his best to force the action. Like others, though, he couldn’t solve the puzzle that is Mayweather and spent much of his night punching at an opponent who had already moved away from him.
“I didn’t know how to get him, it’s extremely simple,” Alvarez said. “He’s a great fighter, very intelligent. The frustration was getting in there, but he’s a great fighter. We tried to catch him.”
Alvarez said before the fight that he had the game plan to solve Mayweather’s tricky defence and fast hands. If it failed, he said, he had other game plans he would implement to win the fight.
But he had no plan that worked once he got into the ring and found out just how difficult Mayweather can be.
“At the same time, he also missed me a lot,” Alvarez said. “His punches landed on my gloves.”
Ringside punch stats showed Mayweather dominance, crediting him with landing 232 of 505 punches to 117 of 526 for Alvarez.
The sellout crowd of 16,746 at the MGM Grand on Mexican Independence weekend tried its best to urge Alvarez (42-1-1) on, but the cheers of “Canelo! Canelo!” were faint and wistful by the late rounds. Mayweather was so much in charge that the only question was whether the ringside judges would allow him to pitch a shutout.
They didn’t, but that was the only disappointment on a night that Mayweather solidified his claim to being one of the best ever and padded his bank account in a way no other fighter has ever done.
Mayweather came out aggressive and used his speed to hit Alvarez with one or two shots in the early rounds and then get safely out of the way. Alvarez tried to stalk Mayweather and throw right hands, but Mayweather was usually safely out of the way by the time the punches arrived.
“He’s a tough competitor,” Mayweather said. “A tough competitor.”
Alvarez kept trying to force the fight, but every time he went after Mayweather he paid for it with a counter right or a combination to the head. By the fourth round he was beginning to get frustrated, landing a low blow that angered Mayweather, who was further angered when Alvarez refused to touch gloves with him to resume the fight.
The fight was one of the richest ever — if not the richest ever — with a live gate of $20 million and at least another $100 million from pay-per-view. Tickets were so hot that celebrities were actually offering to buy them and some tickets were being offered online for as much as $29,000.
Mayweather was the big beneficiary of that, making a guaranteed $41.5 million to $5 million for Alvarez. Add in his purse from his win over Robert Guererro in May and Mayweather made $73 million in two fights — easily making him the highest-paid athlete in the country.
Alvarez had some star power himself, with his red hair, good lucks and big punching power winning over most of his native Mexico. The fight was on free TV in Mexico, and some estimates were that 70 million people would watch.

Loading...
PHOTOS of The New JKIA International Arrivals Terminal Opening Today < Previous
VIDEO – Kenyan US Army Officer Preaching To Fellow Servicemen In Luo Next >
Recommended stories you may like: