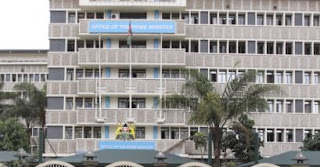 The government has said that the current Prime Minister’s office along Harambee Avenue will be occupied by Deputy President–Elect William Ruto.
Previous arrangements would have seen Nairobi Governor Evans Kidero occupy the state of the art Ex-Shell & BP house.
The building would have become the permanent office of the governor of Nairobi, in the foreseeable future.
It was bought by the government in 2009 for almost Sh 1billion, renovated and furnished to house the Office of the Prime Minister. This was after the power sharing agreement signed in 2008, which meant the president and prime minister had to work closely. Initial plans was to construct two offices in Upper Hill, to house the Offices of the President and Prime Minister. Land set aside for Capitol Hill Police station had been identified for the Office of the President. The government would later settle on the BP & Shell option.

Had the Transitional Authority had its way,Evans Kidero would have been its occupant, but now the government has overturned it, instead giving the office to Deputy president-elect William Ruto. Kidero will now settle for City Hall, at the former Mayor’s office.
Previously, the vice president’s office was at Jogoo House.

Whether by design or by chance, Ruto’s new office is fitted with a teleconference facility, donated by Cisco international during its renovation in 2009. This may come in handy should ICC let him attend his trials via video link.
© nairobiwire.com

Loading...
Photos of Uhuru Kenyatta’s Children < Previous
‘Millionaire’ Kim Kardashian Only Has $10,000 In The Bank.. Hackers Reveal Next >
Recommended stories you may like: