Njenga Karume is Not Dead. 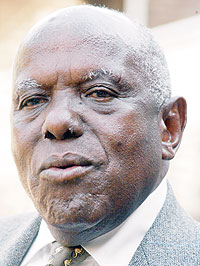 Njenga Karume is not dead. The ‘most trusted’ news source, Nation, today fell for rumours that veteran politician Njenga Karume had died. On their facebook page, they broke the news of his death, but were quick to retract that by posting,

Deputy prime minister, Uhuru Kenyatta assured his fans that the politician was not dead by posting,

“Having spent a wonderful afternoon yesterday in the company of Hon. Njenga Karume, who I found to be joyful and in good spirit, I am shocked  to be made aware this morning of rumors of his passing on. As a people, let us desist from engaging in hearsay and rumor mongering as this ultimately leads to anguish, fear and pain to all those involved. Let us ensure that the truth always prevails. I wish our old man a long life and a speedy recovery.”

Someone was meanwhile in a rush to update Wikipedia on Njenga Karume’s page.

The page was later ‘re-updated’.

The correct story is that, Njenga Karume is very sick and will reportedly be flying out for medi-care. The president is said to have paid him a visit yesterday. The internet had recently killed Mzee Ojwang.

Loading...
Jeff Koinange Dissed By Star Newspaper For being Openly Anti-Raila. < Previous
NTV Sacks Albert Gachiri For ‘Killing’ Njenga Karume. Next >
Recommended stories you may like: