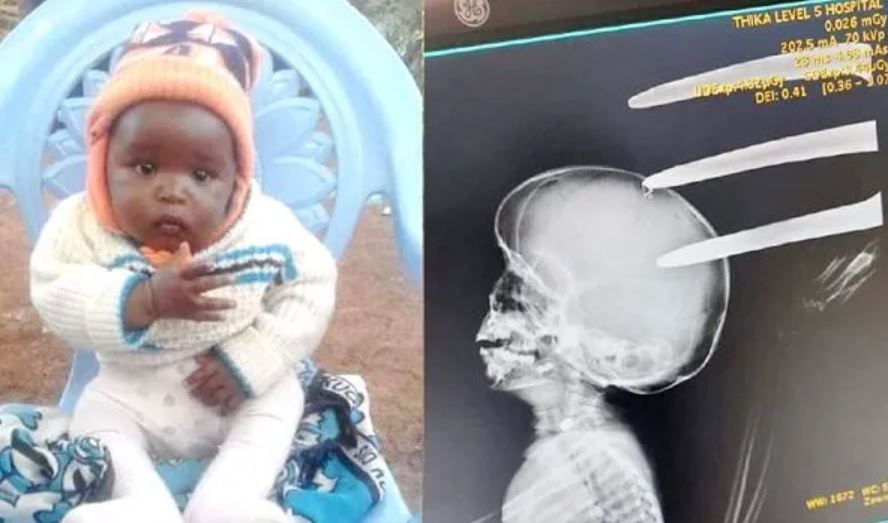 A new twist has emerged from the ongoing inquest into the tragic death of baby Travis Maina who died at the Kenyatta National Hospital on October 11, 2022.

The national referral hospital on Tuesday, December 6, 2022, debunked claims by baby Travis’ mother, Judy Muthoni, that Travis was struck on the head with a fork jembe by his elder sibling.

Muthoni, 29, had claimed that baby Travis, aged two and a half years, was playing with his two brothers aged eight and six years when the accident happened.

But appearing before the Senate Health Committee, KNH CEO Evanson Kamuri intimated that the boy could have been a victim of a domestic fight between his parents.

Kamuri argued that the level of injury inflicted on the baby could not have been caused by a child.

He said the medics who attended to the child doubted if indeed the child was injured while playing with other children.

“It was a severe injury that could not have been inflicted by other children while playing. That woman needs to come out clear on what exactly happened. We are very sorry for what happened but we have also been asking ourselves what happened,” he said.

Kamuri called for further investigations into the incident by an independent body to unravel the truth.

He also told the Senators how the mother, upon learning of her son’s passing, wailed saying her husband had aimed the jembe at her.

“When we broke the news of the death of the baby, the mother started to scream in distress, revealing how her husband had killed her baby. She was wailing, saying how the ‘jembe’ was aimed at her,” Kamuri said.

Adding: “It is an issue that requires to be investigated by another body.”

The KNH boss also termed as “high level of dishonest” claims by Judy Muthoni that she was asked for Sh20, 000 before the baby could be operated on.

On negligence claims, Uasin Gishu Senator Jackson Mandago put Kamuri to task to explain why the toddler was not rushed to the theatre.

Dr Kamuri said baby Travis had lost so much blood and needed to be stabilized first.

“We had to give him blood first. There was also the risk of cardiac arrest considering the patient was a baby and we could not give him too much blood all at once hence the process of blood transfusion had to be much slower. We could only take the child to the operating room once we were assured about his condition.

“We have CCTV cameras. You can take a look and see exactly what happened from the time the baby arrived at the hospital,” he said.

The Health Committee said they will counter-check the claims made by the mother and those of KNH before drawing any conclusion.

“Please share with us in case there are any lapses. This will assist in making our recommendations,” said Senator Mandago.

Here’s What’s Trending in Nairobi This Thursday < Previous
Twitter Roasts Charlene Ruto For ‘Lying’ About Selling Smokie Pasua at Daystar Uni Next >
Recommended stories you may like: