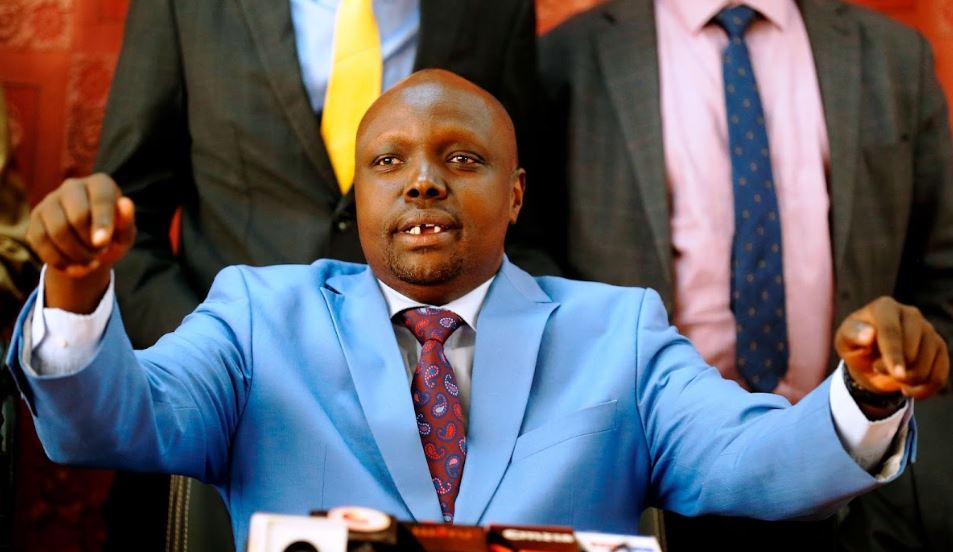 They want Kuria kicked out of office over the importation of GMO maize into the country.

“Starting tomorrow (Wednesday, November 23), we will collect signatures to impeach Kuria as the CS for Trade. He should stay away from the maize discussion,” Pkosing said at a presser outside Parliament Buildings in Nairobi.

“I want to tell Kuria, he will be the first Cabinet Secretary to leave office. He could leave before Christmas if he doesn’t change. We will collect signatures to impeach him, he is not above the law,” he added.

Senator Cherargei on his part demanded the immediate cessation of the importation of duty-free maize into the country.

Cherargei said the maize importation is a deliberate move to kill maize farming in the country. He lamented that several bags of GMO maize had already been imported into the country without due procedure.

“As MPs from maize-producing regions, we seek to know the reason as to why ships are already docking in Mombasa Port without the laid out legal procedures,” Cherargei said.

“It seems that the cartels are now back in the business and this time they appear more aggressive, more ruthless in this season. Even on the GMO issue we don’t need to rush until we have proper laws, policies, rules, and regulations to govern the use and importation of GMOs in the country,” he added.

According to the law, a minister can be impeached on grounds of gross violation of the Constitution, or of any other law, committing a crime under the national or international law, or gross misconduct.

Article 152 of the Constitution stipulates that at least a quarter of the MPs (88 out of 349) should support a motion to remove a CS from office for the impeachment process to proceed to the next stage.

The president would then decide whether to sack the CS or not.

Sakaja’s Plan To Protect Nairobi Traders From Extortionist County Workers < Previous
Here’s What’s Trending in Nairobi This Wednesday Next >
Recommended stories you may like: