Owner of Collapsed Building Caught Trying to Flee to Texas 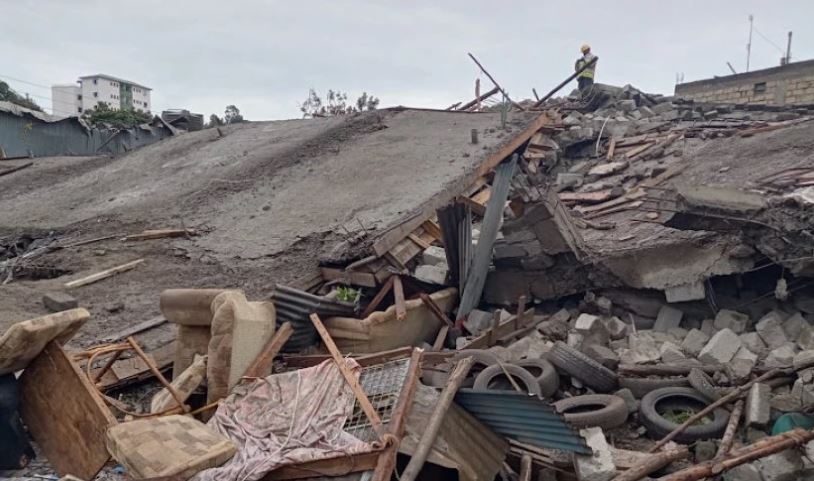 The proprietor of a building that collapsed in Ruaka, Kiambu County last week was arrested Monday morning.

Police reports indicate that the owner was nabbed at the Jomo Kenyatta International Airport(JKIA) in the wee hours as she attempted to flee the country.

The Directorate of Criminal Investigations (DCI) identified the owner as 59-year-old Jennifer Kamau. Hawk-eyed sleuths based at the region’s main international gateway pounced on Jennifer at around 2 am minutes before she boarded a flight destined for Texas, in the USA.

Following the arrest, the woman was taken ill and rushed to a city hospital by DCI officers for treatment before being arraigned in court.

In the unfortunate incident that occurred in Ruaka on Thursday, two people died after a six-storey building belonging to the woman collapsed on an adjacent building, while tenants were asleep at around 3 am.

Shockingly, the arrest came just hours before another building came tumbling down in Ruiru town, Kiambu county moments after occupants were evacuated.

County Commissioner Joshua Nkanatha said police were hot on the heels of the property owner who went into hiding.

The five-storey building first developed cracks in the walls and support columns on Saturday, leading to an emergency evacuation of over 100 occupants.

No casualties were reported.

This brings to four the number of buildings that have collapsed within Nairobi and Kiambu in a month.