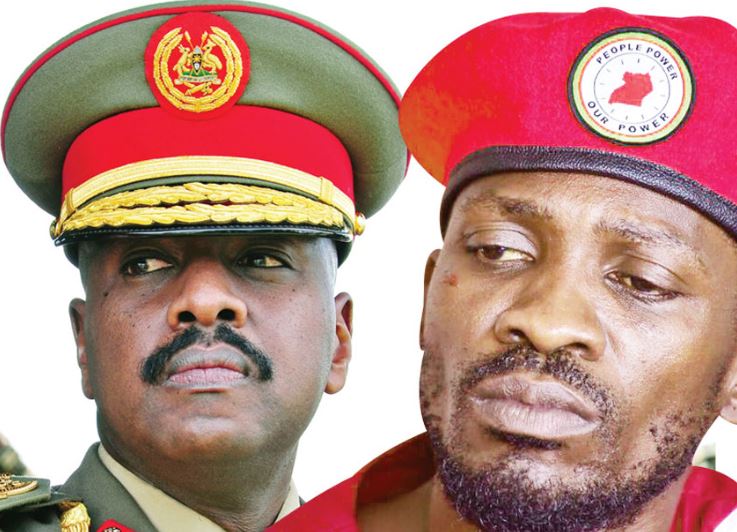 Muhoozi sparked another KenyaVsUganda Twitter war after declaring that it would take him less than two weeks to capture Nairobi.

While Uganda’s Ministry of Foreign Affairs has distanced itself from his comments, Museveni saw it fit to promote him from Commander of Uganda’s Land Forces to the rank of full General.

It is the third time Museveni is promoting his son in the hierarchy of the army.

One Ugandan who hasn’t been impressed with Muhoozi is opposition leader Bobi Wine. He took to social media to slam the president’s son describing him as a monster.

“Dear Kenyans, you now understand what it means to live in Uganda under Gen. Museveni and his son, whom he gifted the highest military ranks and put him in charge of our land forces!”

“Sadly, beneath the senseless tweets lies a monster who brutalises and tortures our people for fun!” he added.

Born in 1974 in Dar es Salaam, Muhoozi studied in Tanzania and later at Mount Kenya Academy in Nyeri, Kenya. He also studied in Sweden.

In 1999, Muhoozi joined the Uganda People’s Defence Force as an officer cadet and graduated in 2000 from the Royal Military Academy Sandhurst.

He later attended the Egyptian Military Academy and the Kalama Armoured Warfare Training School. Muhoozi later took a one-year course at the US Army Command and General Staff College at Fort Leavenworth, Kansas, graduating in June 2008.

Kenyans Have Right To Choose GMOs: Senator Rejects Lifting of Ban < Previous
The Trending Memes and Tweets This Wednesday Next >
Recommended stories you may like: