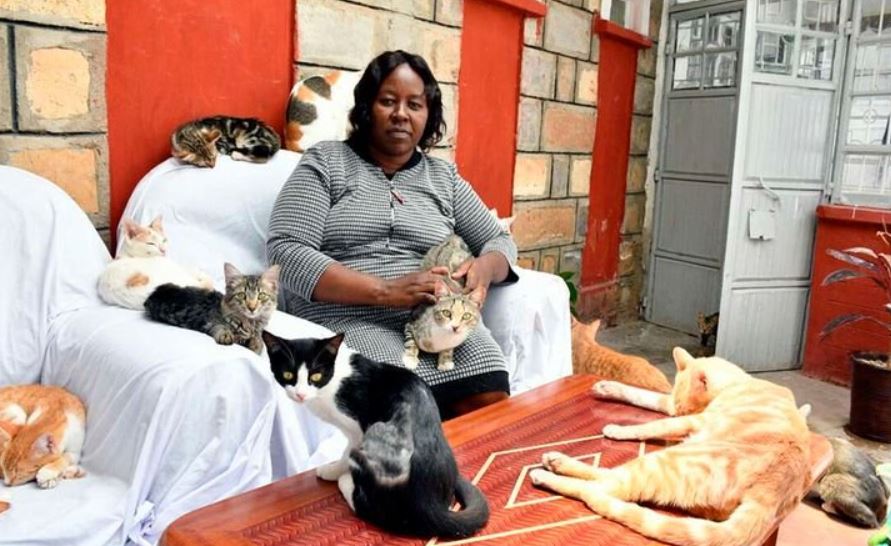 Rachel Kabue is the founder of the Vegan Society of Kenya and The Nairobi Feline Sanctuary. The 50-year-old works with three organisations whose work is centered on animal rights. She is also Kenya’s liaison for Animal Save Movement.

Kabue shares how she found her purpose after an excursion to India.

“You have changed. This is what my house manager told me a few days after my return from India. She said that I had become more tolerant, compassionate, and generous.  I would smile and nod in the affirmative.

Five months prior, I had left my children under her care and went for hard-nosed research and to study Yoga at Gujarat University. That was 2011. I met an Indian friend and she started telling me about meditation. All my life, I had known about Christianity.

I found the concept interesting and I wanted a deeper understanding of matters of spirituality. Then, I was in a space where I had questions about life—what is there about life beyond earning a living, pursuing an education, and starting a family?

The purpose of yoga is to cultivate discernment, awareness, self-regulation, and higher consciousness in an individual. While there, I was introduced to the eight limbs of yoga.

One of them is Ahimsa (non-cruelty to any being including animals). This simply means not eating animal products, not mistreating them, or wearing apparel made from them

This principle married into my inner belief. Since childhood, I cared more about animals than most people around me. I cringed when I saw an animal being mistreated and I couldn’t stand watching an animal being slaughtered. There was always a part of me that was averse to animal cruelty. But, I consumed animal products, albeit in moderation. My favourite food since childhood is fruits.

Upon return, I gave most of my clothes away. We had been taught about losing attachment to material things.  I currently have just four dresses and three pairs of shoes. I try very much not to have more than I need.

I also did an overhaul of my diet. I came back as a vegetarian but a few months down the road, I got to learn about veganism and I felt that it resonated more with me. Veganism is the exclusion of all animal products in your life and any use of animals for anything. Not for transport, clothing, entertainment, eating part of their body, or using any product tested on animals. 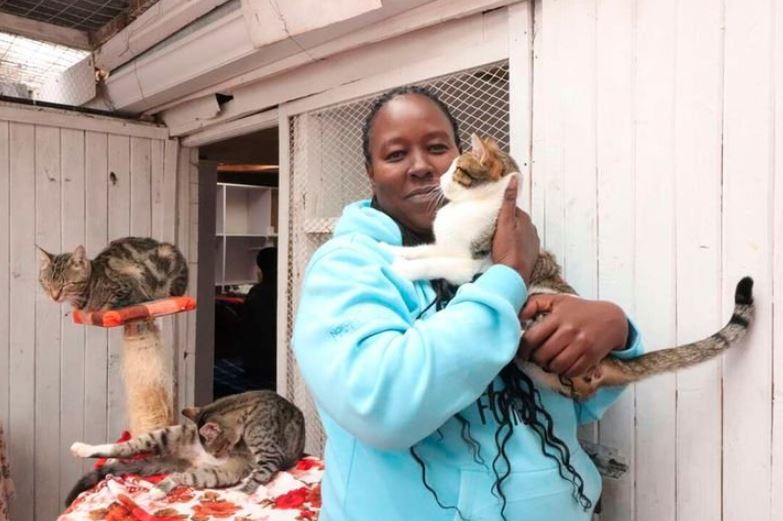 And you must be wondering, “is the buying process of clothes and food items tedious?”  Well, it was like that in the beginning but now when I go shopping, I know what I am looking for and I hardly go shopping anyway.

But, it was not just about changing my diet.  I had become more conscious of animal cruelty and I was seeing it everywhere. It’s like my eyes had been opened. I started rescuing animals in 2013. At that time, I was living in a three-bedroom house. I started by hosting cats because they were everywhere I looked —cats that had been abandoned by their owners, cats that looked desperate, and those that were pregnant and with nowhere to go. At one point, I had 23 cats in my house.

Progressively, with part of my savings and income, I was able to get a bigger space that allows me to keep more cats. I established The Nairobi Feline Sanctuary in 2020. Here, I have 350 cats at the sanctuary and four staff who look after their well-being. I say that you can always tell a homeless cat. I rescue them wherever I go.

The other way we get cats is actually a drop-off by individuals who are moving abroad and have no one to adopt the cats.

With part of my savings, I moved to our new space. It’s a rental area that is managed through my income and donations that come in periodically from well-wishers. Food and medical supplies are our greatest expenses. I am living a life dedicated to the comfort of the felines.

They have to be spayed, fed and litter changed every day. Also, the workers have to be paid. I can say that 90 percent of my income, which I get from events related to the organisations, goes into the well-being of the cats. So far I have spent around Sh2.5 million in restructuring the 50 by 100 plot in which we reside for the well-being of the cats.

Some individuals ask me, “How many cats are too many?” I say, there’s no limit as long as there is space.

My five children are very supportive and one of them who is already working supports me financially. Also, they love cats.

The animal sanctuary is not a shelter. It is a refuge—a safe space for the cats.  We rescue all types of cats, whether healthy or sick. When they are here, nobody is going to harm them or use them for stuff like breeding.

My close friends and family understand why I do this. However, I have heard about stereotypes, although not directly said to me about individuals and especially women who keep cats. There’s a notion that we are trying to fill a void or use cats for business and are oftentimes associated with witchcraft.  That’s far from the truth. As a vegan, I cannot do anything that would harm the welfare of the cats. I see cats like any other being. Deserving of love and care.

We are in the process of getting land and I would like to offer shelter to other animals. Also, we are still not taking all cats that need to be sheltered because of space. Our motto is “We welcome all cats.”

WOMANTALK: The Highs and Lows of Being Single in 40s < Previous
Funny Tweets by Kenyans on Twitter for your Monday Blues Next >
Recommended stories you may like: