Suspicions After All Media Stations ‘Stop the Count’ 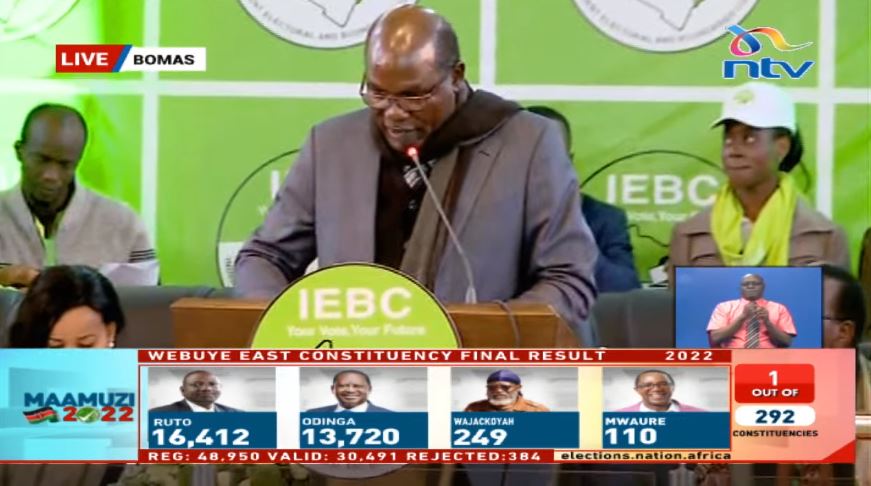 At around the same time on Thursday, all major TV stations in Kenya stopped updating their presidential vote tally regularly.

Of the 3 main stations, KTN appears to have been the first to stop this tally, concluding with Ruto leading with just under 50% of the votes.

Citizen TV followed suit at around 12 noon, also with Ruto leading with just below 50%. Before this, they had been the station that had tallied the most Form 34As from the IEBC portal.

Nation Media was left as the only one giving regular updates, but those would soon stop. Their first major pause had Ruto leading at just over 50% of the vote. However hours later, a small batch of data was added that dropped Ruto to just under 50%.

Since around Thursday afternoon, none of the 3 stations has added significant data to their tallies, leaving the numbers on your screens basically stuck. Occasionally, a few thousand votes are being added, but with hundreds of thousands of votes left, it would take them weeks to complete at this speed.

Just before the election, the media stations boasted of their preparedness to cover it. Citizen TV in particular took us on a tour of their tallying centre, which was adequately staffed by tens of data entry clerks. Nation Media also had their own tallying centre.

It therefore beats logic why the numbers have barely budged for almost 24 hours now. If it took them less than 36 hours to tally over 85% of the Form 34As, why is it taking over 24 hours to finalize the final <15%?

Based on the resources they told us they had allocated to covering the election, any person can reasonably conclude that all these stations have a final tally internally.

Therefore, many Kenyans are now publicly wondering whether this information is being withheld deliberately, and for what reason.

While they have faced many accusations of bias this election period, the media was at least expected to conduct itself independently when it came to giving Kenyans an accurate and timely vote count.

This, unfortunately, does not seem to be the case.

With the IEBC process taking unusually long because they have to physically receive all forms at Bomas before declaring results, the media has completely absconded its duty to Kenyans. Anxiety is in the air, and there is no one trusted enough to relieve it.

Kenyans are left wondering, if the plan was to ‘stop the count’ when the numbers swang one way, why did they start to begin with?

Everything Trending in Nairobi This Friday < Previous
What IEBC Did After Didmus Barasa Sent Agent to Collect Election Certificate Next >
Recommended stories you may like: