Residents of Nasra Estate in Njiru, Nairobi County are still reeling from shock after a man stabbed his estranged wife before setting her car on fire on Sunday, August 21.

Police identified the suspect as 34-year-old Dennis Musyoka, who is said to have been asking his wife Elizabeth Munyalo to drop off their daughter at his place to spend time with her.

On the fateful day, Elizabeth arrived at Musyoka’s place with their girl, aged two and a half.

Musyoka then boarded Elizabeth’s car – a Honda Vezel – before pulling out a knife and stabbing her multiple times in the neck.

“He removed a knife immediately he boarded the motor vehicle and stabbed the lady four times on the left side of the neck. The lady managed to jump out of the vehicle and was rescued by good Samaritans,” a police report read.

The suspect then set himself on fire with their daughter still inside the vehicle. 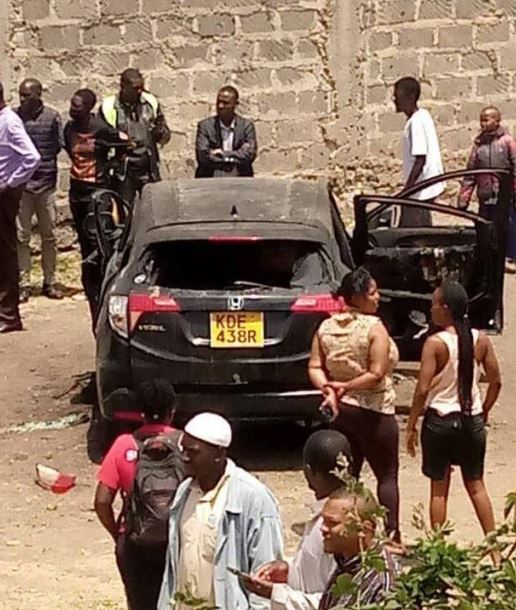 Musyoka died while Ms Munyalo and her daughter were rushed to Mama Lucy Hospital.

Munyalo was Monday said to be in stable condition while her daughter who was in critical condition was transferred to Kenyatta National Hospital for specialized treatment.

Detectives from the Directorate of Criminal Investigations (DCI) in Kayole sub-county pronounced Musyoka dead at the scene of the incident.

They recovered a knife and a partly burnt five-litre jerrican that police believe contained the petrol that Dennis used to set the car on fire.

Meanwhile, Musyoka’s body was moved to the Mama Lucy Hospital morgue as detectives in Kayole launched a formal probe into the incident.

Everything Trending in Nairobi This Tuesday < Previous
Senator-elect Okiya Omtatah Also Moves to Court To Challenge Ruto’s Win Next >
Recommended stories you may like: