Sifuna Speaks on Alai ‘Fight’: “He is Not a Light Guy 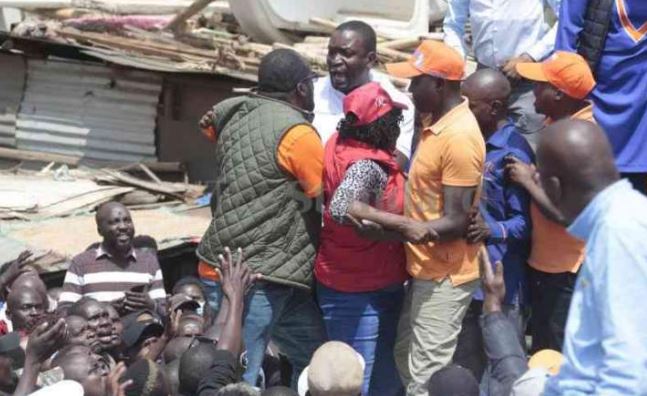 Sifuna and the Kileleshwa MCA aspirant locked horns in front of their party leader Raila Odinga during an Azimio rally in Nairobi on Saturday, July 16, 2022.

Alai is said to have been angered after Sifuna denied him a chance to address the crowd.

A viral video showed Alai climbing atop a vehicle where Sifuna was standing and confronting him, prompting Raila to intervene.

Speaking about the incident, Sifuna said it was blown out of proportion as it was only a safety issue. He said he was preventing Alai from climbing on top of his car as he is a heavy guy.

“It was just a safety issue. That was my vehicle, and you know cars have a carrying capacity….he is not a light guy.

“If I show you my windshield now, it is shattered. I have a 1999 Mitsubishi Pajero that I use for the campaigns, and I took it to the shop to install a roof rack. So if you are going to come in my car, please come to the top,” Sifuna added.

The Nairobi Senator aspirant also laughed off claims that he was hospitalized after Alai clobbered him.

“I am coming live from City Mortuary. I am told I was beaten and rushed to hospital where I passed away after succumbing to head injuries. How can you be wishing ill on someone?” Sifuna posed.

Wajackoyah Identifies Spies From Raila, Ruto Camps < Previous
Here’s What’s Trending in Nairobi This Wednesday Next >
Recommended stories you may like: