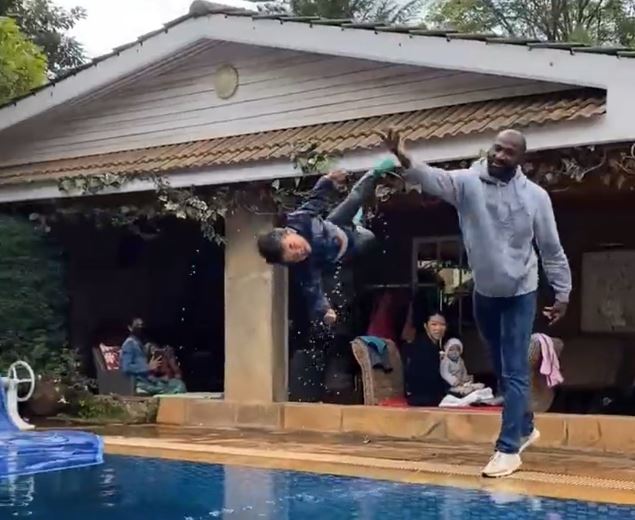 Kenyan rugby player Dennis Ombachi caused quite the stir on Twitter after he put his young son’s swimming classes to the test.

In a now-viral video, Ombachi is seen dangling his one-year-old son by the leg and tossing him into a swimming pool.

It was some sort of graduation for the baby boy who according to Ombachi had completed four weeks of water safety classes.

“4 weeks since we started water safety classes and my son graduated today, officially WATER SAFE! Last class, he get to go in with 4 layers of clothing including two diapers, more than doubling his weight in water. Proud father,” he tweeted.

The food blogger also shared another video of his 8-month-old daughter graduating under the watchful eye of Ombachi’s wife Svetlana Polikarpova.

“Graduating as well was our 8-month-old daughter, officially the only one who can’t swim in here😂😂😂,” Ombachi wrote.

Graduating as well was our 8 month old daughter, officially the only one who can’t swim in here 😂😂😂 pic.twitter.com/EqnLtsTuI5

While it’s now a new concept to toss a child into a pool so they can learn how to flip onto their back and float, Ombachi’s actions sparked wild reactions from Kenyans on Twitter.

Topping up bundles as I wait for Parenting Experts Committee replies.

“Ombachi tossing his kids in the pool had me thinking of how mines swam inside you. It was never my intention to have you as a single moms. Hope you can get time to catch up sometimes…” pic.twitter.com/35V1C0qmvR

Gonna be thinking of ombachi when someone tells me “umenitupa”.

Ombachi’s daughter watching her brother get thrown into a pool. pic.twitter.com/AAMrnKgBJE

Ombachi’s kid will go to the Olympics for something. Combined nature & nurture. His father is an athlete plus he has created the environment to learn & try new things. To grow. Perfect combination.

4 weeks in
water safe
dangle baby by the leg
throw him in the pool.
DONE! https://t.co/O53LhR12Ra

This used to be Beyoncés internet. Now it’s Ombachi’s. 🤣

Anyone coming at Ombachi, I’ve just found out that kids water safety thing is a thingpic.twitter.com/s4JWtyjiaD

It’s not the kid getting into the water with clothes for me. It’s Ombachi having his clothes on as he does it. Clear confidence in the child that he got this.

(From Lifeguard experience, this is to see how the kid will handle the situation if s(he) falls in the pool in clothes) https://t.co/Ov4GPI0rjG

When you have to compete against Ombachi’s child.

Ombachi tossing his toddler into the water fully clothed has everyone HEATED. 🤣🤣

But you fools dont realize little kids fall into pools and ponds all the time and drown?

Mtoto wa Ombachi is either being fed real good or tossed into water head first. No in-between.. 😂😂

4 weeks since we started swimming classes with my son. Today I am the one graduating… 💙💙 cc: Ombachi pic.twitter.com/l1baXHHByq

Her: I swear this kid is yours
Ombachi: If he’s mine he can swim pic.twitter.com/YojUdCfnIN

I wouldn’t put it past Ombachi to give his son a 3:16 special.. pic.twitter.com/cBhNCQF6ef

Ombachi is literally doing what Angela Okutoyi was being exposed….

Those kids will be in Olympics 2028 and there is nothing you can do about it.

‘4 weeks since we started flying classes with my son. Today he graduates…’ pic.twitter.com/ZLNxCsWtbV

I am not your strongest soldier sir🥲 pic.twitter.com/EUHjPLJSgb

CRAZY – The Funny Memes Going Viral on Social Media < Previous
Pain At The Tap: Water Prices Set To Rise in Nairobi Next >
Recommended stories you may like: