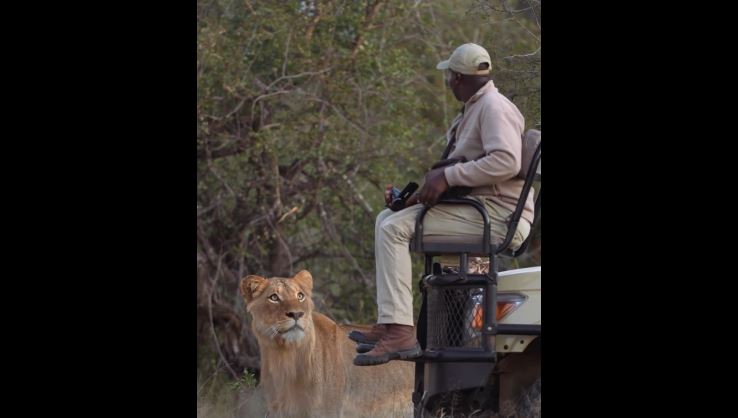 Over the last week, the internet has been awash with a gripping video of a lion sneaking in on a man on a safari.

The short clip captured the lion menacingly approaching and staring at a safari tracker perched on a land cruiser. At first, the tracker was completely oblivious to the lion as it approached him on his blind side.

When he turned to his right, he came face to face with the curious lion, giving him a momentary scare.

Unfortunately, the video ends on a cliffhanger, leaving most viewers with a lot of unanswered questions as to what happened next.

Well, we have found the answers that you have been looking for.

While it was widely believed to have happened in Kenya, the video was actually shot in South Africa at the Pondoro Game Lodge.

It was shot by Everseen Africa, a Southern Africa travel and tours company specializing in wild safaris.

On Thursday, Everseen Africa shared the full story and video, identifying the animal tracker as one Erik.

“Over the past few days, this video has accumulated over a billion views and has been seen everywhere in the world.

What happened?
We were following a pride of 13 lions called the Kudyela pride. The pride of Lions heard a big herd of Cape Buffalo approaching the area in search of water. The lions quickly got into place and tried to hunt the buffalo but that did not end well for the group of lions as the buffalos started to chase them off.

Everyone was watching this battle between Lions and buffalo going back and forth.

And that’s when I saw the young Kudyela male walking closely behind the vehicle and started to record the moment.

The lion came around and stared at Erik. Erik probably saw me filming on that side and turned around and saw the lion close to him. About 1 meter from him. Very calmly and correctly Erik grabbed the handle but not because he was afraid. He just held on and observed what the lion’s focus was really on. The lion towards the end of the video. You will see he lifts his head up to actually look at what is happening with the buffalo that are still following the lions. After the older brother chased the buffalo back a bit you can see that the younger Kudyela male lion went to lay down in front of Erik about 5 meters away.

Shortly after that the entire herd of buffalo approached and scared of the lions even further into an area we did not follow up until the next morning on a game drive.

The next morning the lions moved far east and were not successful this time around.”

And last but not least, the full video courtesy of Everseen Africa.

60 Victims of Human Trafficking Destined For Slave Trade Rescued in Nairobi < Previous
Recommended stories you may like: