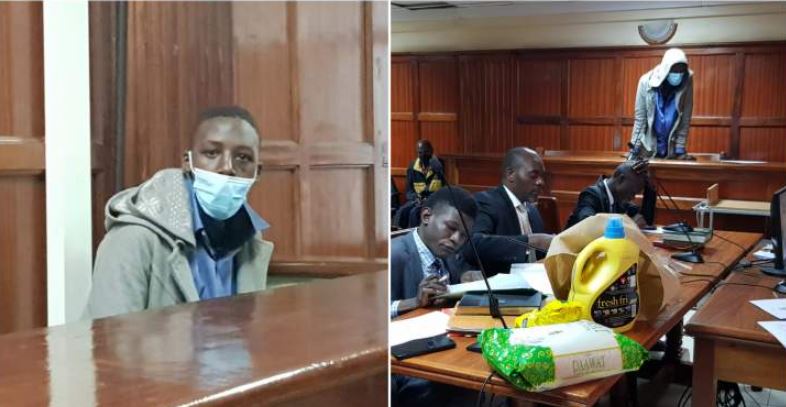 The Kenyan online community on Twitter has decried that there is no justice for the poor after a shoplifter was fined Sh100,000 for stealing goods worth Sh3,165.

Alvin Linus Chivondo, 21, will alternatively have to serve a one-year jail sentence after he pleaded guilty before a Nairobi Court.

Linus posed as a customer at the Naivas Supermarket along Moi Avenue, where he tried to steal 5kgs of rice, 5 litres of cooking oil, 2kgs of sugar and other items valued at Sh3,165.

He was however intercepted while attempting to exit the supermarket without paying.

In the first count, the court heard that on April 10, 2022, at Naivas Supermarket located at Development House, Moi avenue in Nairobi he stole five kilogrammes of Daawat long grain rice, 500 grams of American gourmet honey and 500 grams of Fahari ya Kenya tea leaves.

The charge sheet added that he also stole five litres of Fresh Fry cooking oil and two kilogrammes of Kabras Sugar being the property of Naivas Kenya limited. 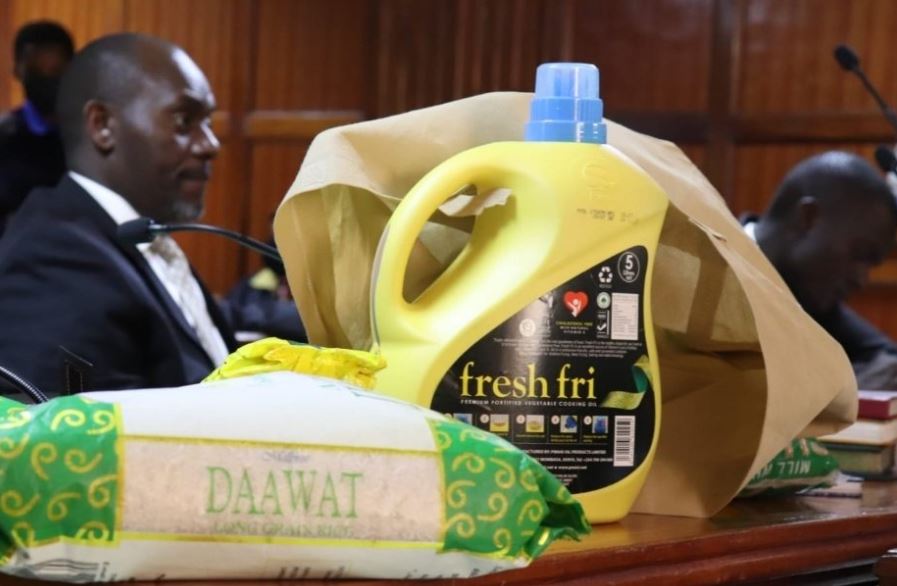 It also emerged that Linus Chivondo is a repeat shoplifter having been caught stealing at the same supermarket on April 3, 2022.

He was however pardoned by the Officer Commanding Station (OCS) at Central Police Station. Linus said a good samaritan whom he had met earlier at the supermarket bailed him out by paying the cost.

Defending himself over the second theft, Linus said hunger drove him to steal as he had lost his job. He also said he has a family and has a jobless single father depending on him.

The accused asked the court to forgive him and promised not to repeat the offence.

But in her ruling, magistrate Kagendo found that the accused was not honest with his words and was a perpetual thief. 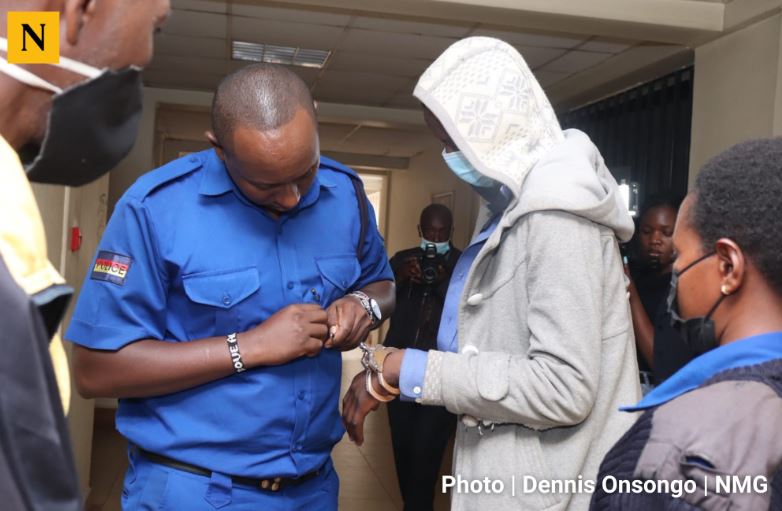 Kagendo also mentioned that last week she released four people who had been arrested for shoplifting at Naivas Moi Avenue.

“This is a clear indication that the supermarket is prone to theft by people who are reaping from where they have not sown,” she ruled.

Further, the magistrate said the sentence she handed Chivondo would deter other thieves from the vice.

The sentence elicited mixed reactions from Kenyans on Twitter, the majority of whom felt it was a bit severe. They included ODM leader Raila Odinga who called for Linus to be released unconditionally.

“Let Alvin Linus Chivondo be released unconditionally!. Criminals are now getting a reprieve to campaign freely, while petty offenders are being jailed. Let the courts get their priorities right, for once, you can’t jail a man for trying to feed his family,” read a tweet from the official Raila Odinga account.

Other Kenyans rightfully observed that the Kenyan judicial system is heavily skewed in favour of the rich and against the poor.

Some of the sympathizers also appeared to have been incensed at the recent decision by the Director of Public Prosecutions (DPP) Noordin Haji to give clemency to politicians facing graft cases during the political season.

Here are some of those reactions;

The Scales of Justice in this Country…wueeeh!

A Kshs. 3,165 Foodstuffs Theft attracts a Fine of Kshs 100,000 or a 1 year Prison Sentence….
Meanwhile, @ODPP_KE are not prioritizing graft cases against high profile individuals.

The inconsistency in our judicial system is appalling. Some cases are fast-tracked while others are postponed to grant the ‘suspects’ time to concentrate on their campaigns.

@naivas_kenya am your regular shopper at your stores. I will see you in the next life. You could have perhaps had the guy work for you to repay. See the kind of stuff he shoplifted, no perfume either.

@naivas_kenya tuma paybill tusaidie huyu jamaa, looks like his only wish was to feed his family 🙏

Ain’t justifying what he did, but with the current economy alikosa iyo 3k ya kulipa iyo bill, 100k atatoa wapi?@naivas_kenya mko na ufala sana btw not to mention our justice system 😡😡

Don’t steal if you are poor. In this country, justice is for the rich.

This is terrible Daktari. The man largely stole food items which means he had some hungry mouths to feed. He could have could benefited from Mercy and humanity. Fine of 100,000kshs for someone who could not afford food worth 3k is inhumane!

Where i come from, incase a man/woman is found stealing food stuffs to eat, he is allow to go freely and never come back, if he is stealing then to sell, he is beaten mercilessly, in this case Alvin Linus might have shop lifted this items to feed his family, deserves being freed.

In the NCPB case – walukhe and the wakhungu lady were fined – double the said amount.

Why is this man being fine almost 30 times what he had attempted to steal?

Umaskini ni mbaya sana. When one is poor – even the law hates you.

Wtf? In Kenya, one is better of looting 500M from public coffers than stealing goods worth 5,000.

This is absolute madness.

This country we have leaders misappropriating funds who can never be held accountable because they are somehow protected. I wish our law and judgement would apply to the rich as it applies to the poor.

Are we serious right now? Yaani chakula unaenda jela for a year yet we had people steal billions! BILLIONS! and have the audacity to vie for political seats?? Aki Kenya hatujachoka na mateso bado…

I usually don’t understand how the ruling is done, because why fine someone 100,000/- because of stealing goods worth 3800/- and yet the owner received his/her goods back. Just make it fair for once and let it a reasonable amount as fine.

While those who stole 64b at KEMSa are still cat walking at the streets of nairobi .awuoro hii ndio kenya

The court should have postponed his case until after the August Elections, at least he prepares to vote out those who put him in that situation.

Alvin has been arrested for shoplifting at Naivas , Items worth 3k and has been fined 100k
The KEMSA thieves are out here seeking for votes
He may be legally wrong but Morally right
The poor will now feed on the Rich
A man who takes to eat has not stollen pic.twitter.com/8rptjwYU7g

The inconsistencies in our judicial system is just appalling. Kidero is free, Babu Owino is free, Waiguru is free, Mudavadi is free. When it comes to Hoi Polloi like Alvin vs Naivas case, that’s where you draw the line. #FreeAlvin #BoycottNaivas https://t.co/vSTM3DclBp

🗣️ Let’s teach @naivas_kenya a lesson, No one realized this Man needed for Food for his Family and would have been just generous and pay for him??

They should remember even Nakumatt and Tuskys were there before them 🤷🏾‍♂️#BoyCottNaivas pic.twitter.com/cP12oF0JfT

Was Naivas supermarket too harsh to have sued the the hungry shoplifter who took food on account of having lost his job? Could the retail chain have asked him to pay tenfold of the Sh4,000 worth goods? Should Naivasha have helped him instead – notwithstanding the criminality! pic.twitter.com/wElZegEpno

The Trending Memes and Tweets This Holy Thursday < Previous
KRA To Deploy Drones To Nab Tax Cheats Next >
Recommended stories you may like: