The wife of Dagoretti North Member of Parliament Simba Arati has caused quite a stir online after her video addressing a political rally went viral.

The MP was speaking at a rally in his hometown of Nyamache, Kisii on Monday, January 17, where he was joined by his Chinese wife, much to the excitement of the locals in the area.

While introducing his wife to his supporters, Arati claimed he has never cheated on her.

“She helps me. I have never cheated on her. I don’t entertain slay queens or funny women,” Arati said.

When she stood up to speak, Arati’s wife started by singing and dancing to a Kisii vernacular song praising her spouse’s leadership.

She then introduced herself as Kwamboka while speaking in fluent Gusii and drummed up support for Arati’s bid for Kisii governorship. 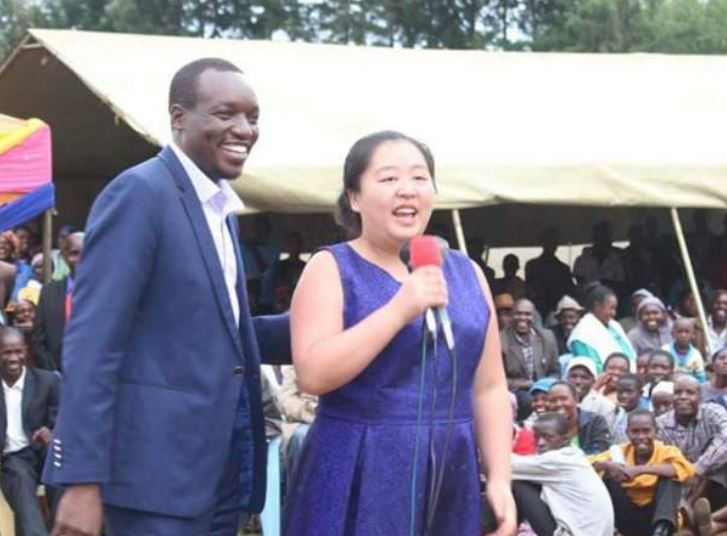 “My people, how are you? My name is Kwamboka and I’m the wife of Simba. Thank you for coming. I request that you vote for our leader Simba Arati,” she said as the crowd cheered in excitement.

Arati met Kwamboka while pursuing a degree in Business Management at Guangzhou University in Guangdong province, China. They are blessed  with two children.

In a past interview, Arati defended his decision to marry a foreigner after he was attacked on social media.

“I married from Asia but these are private family matters. Whether my wife is from Thailand, China, Europe, or wherever it has not affected my ability to lead and deliver for the people.

“Obama’s father was a Kenyan and that did not stop him from being the US President,” the politician said during a radio interview in 2019..

Watch the video of Arati’s Chinese wife Kwamboka below.