Kenya’s Big Five, Why They are a Big Deal and Where to Find Them on Safari

Every visitor on safari to Kenya desires to encounter most of the larger wildlife species the country has to offer.

While these are varied, a particular category known as the Big Five has withstood various existential risks to thrive as they do today.

Known as the Big Five, the African Lion, Leopard, Elephant, Cape Buffalo, and Rhino faced tremendous threats from trophy hunters in the past.

Some of these game hunters would travel to Africa for the sole purpose of game hunting, and emerging with game trophies was deemed a triumphant achievement. These trophies ranged from fur, hides, and game meat, with ivory tusks the most valued.

In no time, animals such as the African White Rhino had significantly diminished numbers. Faced with the likelihood of extinction of most wildlife species, the government banned game hunting and made concerted efforts to sensitize communities against it.

The turn-around has had its challenges but has also yielded fruit. This write-up looks at who the Big Five are, and the Kenyan destinations where you can find them in their natural habitat. 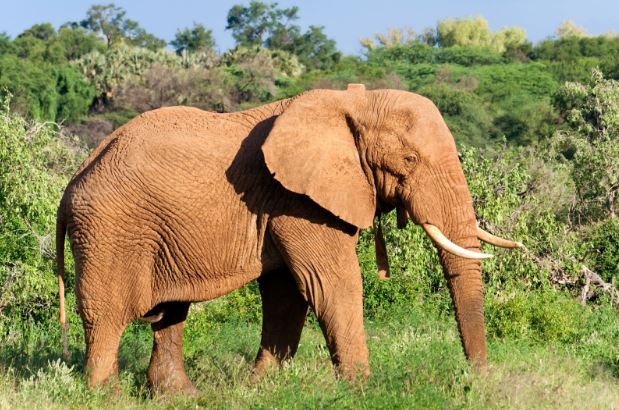 Facts about The Big Five

Known as the King of the Jungle, the Lion is the only beast without a predator.

Standing at the top of the food chain, the African Lion has a robust body with males growing up to 10 feet long and weighing up to 550 pounds (249 Kilograms). This apex predator also has a wild roar that can be heard up to 5 miles (8 Kilometers away).

Unlike other big cats who live a solitary lifestyle, Lions are the only cats that live in groups known as prides. A pride comprises Lionesses, their cubs, and male Lions, with the dominant male as the leader.

While the Lionesses typically conduct the pride’s hunts, the Lion gets to eat first- hence the idiom ‘the Lion’s share.’

Grown males spot a hairy head known as a mane. One fascinating thing about a Lion’s mane is that it can help you distinguish the younger males from the older ones. The darker a Lion’s mane, the older he is.

Most wild Lions are found in Africa, with Hyenas and Cheetahs as their main competitors when it comes to food.

Globally, the biggest land animal is the African Elephant, capable of weighing up to 7 tons! That is way heavier than some vehicles. So on a light note, be sure to have dependable transport when on safari to the wilds of Maasai Mara.

You can opt for a safari Landcruiser or a safari van. Other overland vehicles such as the Ford Ranger, Suzuki Jimney, Subaru 4×4 Cars, Nissan Patrol would also get the job done.

Elephants live in herds under a matriarchal society. These packs mostly consist of females, led by the largest and oldest among them. On the other hand, Males tend to be outliers and wander about in small, loose groups.

Interestingly, these mammoths can communicate with each other across several kilometres via vibrations known as infrasounds.

Though undetectable by human ears, these vibrations are accurately received and interpreted by other Elephants in the vicinity through tiny receptors in their large feet.

Meanwhile, their large ears are a cooling system as they have a heavy supply of veins and will often flap the ears to fan the body.

The Elephant’s multi-purpose trunk acts like a trumpet and is also used for smelling, breathing, handling stuff, and as a drinking straw.

The Leopard loves a solitary and nocturnal lifestyle. You are likely to find this elusive feline lounging on trees and napping during the daytime.

Thanks to powerful jaws, they even haul their prey up the trees away from other predators and consume it at leisure.

It isn’t easy to spot a Leopard due to its nocturnal habits, spotted coat, and reclusive behaviour. However, seasoned tour guides and professional drivers can help you spot them in the Maasai Mara and other game reserves.

Even better, a night game drive in the Mara is a rare opportunity to see them in action as they hunt. 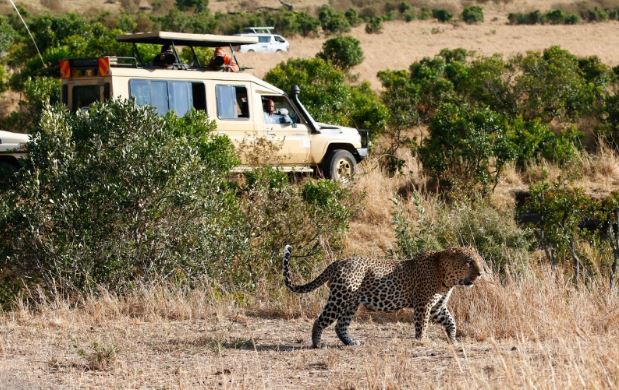 There are five species of Rhinoceros in the world. Of these, two are native to Africa. These are the African Black Rhino and the African White Rhino.

They live in herds which are collectively known as a crash of Rhinos.

As a species, Rhinos have been around for over 50 million years.

These two horned creatures have developed a symbiotic relationship with a tiny bird known as the Oxpecker, which stands on the Rhino’s back and rids them of ticks.

The Cape Buffalo lives in herds of as little as 50 to as many as 500 strong.

They are known for their large curved horns, huge bodies and temperamental nature. Their brute strength is only matched by their grumpiness and surprising speeds of up to 37 miles per hour (59 Km/Hr).

Where to find The Big Five

In Kenya, the Big Five are found in three destinations:

One is the award-winning Maasai Mara Game Reserve, where you can spot them in great numbers, particularly during the annual wildebeest migration.

The second destination is the Lake Nakuru National Park, which is famed for the Big Five populations and hordes of other wildlife and bird species. Hippos and Flamingos are also abundant in this park.

Lastly, we have the Lewa Downs Conservancy, which has scores of the Big Five and has been instrumental in Rhino conservation in the region.

In all the destinations mentioned above, the animals live in the wild, hunting and surviving in their natural environment.

Over 600,000 Kenyans Register for Kazi Mtaani in Just 3 Days < Previous
Two Charged for Abducting, Raping University Student in Nairobi Next >
Recommended stories you may like: