I Work for the Country, You Work for Meru County, Munya tells off Kiraitu 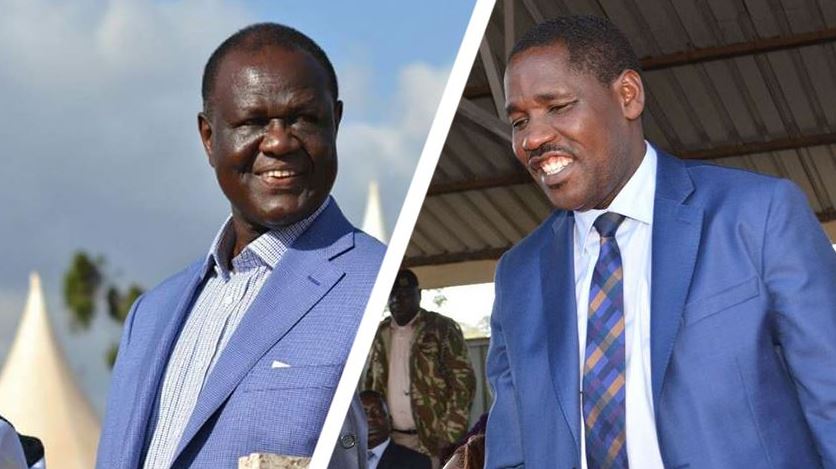 Agriculture Cabinet Secretary Peter Munya and Meru Governor Kiraitu Murungi are in a pissing contest as they prepare to battle it out for Meru gubernatorial seat in 2022.

The CS Munya has told off Murungi for meddling in his ministerial work saying the governor should focus on his county.

CS Munya said he was appointed by President Uhuru Kenyatta as a Cabinet Secretary and he does not answer to Governor Kiraitu.

Munya accused Kiraitu of failing to deliver in his four years as governor and was looking for a scapegoat.

“He has lost his focus and is asking questions. Let me remind him I work for the whole country and not Meru county only. He is the one working for Meru,” he said.

Kiraitu on his part defended his work saying Munya should visit Meru more often to see his development record.

“Just to mention a few of my government’s achievements; we have drilled and equipped 195 boreholes in four years compared to Munya’s 17 in five years.

“We have also constructed 273 ECDE classrooms compared to Munya’s 100 in his entire term. We have completed 105 ECDE classrooms which Munya failed to complete,” the governor said.

Kiraitu also noted that he has transformed Munya’s backyard, Muthaara ward, where his administration has drilled and equipped eight boreholes since he came into office.

“We have also constructed many ECDE classrooms, markets and opened many kilometres of road in the same ward,” he added.

The governor also noted that when he was at the helm of the Ministry of Energy it was ranked the second-best ministry overall.

“He has mismanaged funds for fighting locust invasion, tea, coffee, sugar and maize. He should also not forget that the people of Meru overwhelmingly rejected him in 2017 due to poor performance,” Kiraitu said.

Azziad Nasenya Explains Why She’s Back in School Despite Being Famous < Previous
President Kenyatta – Multilateralism Key To Addressing Global Challenges Next >
Recommended stories you may like: