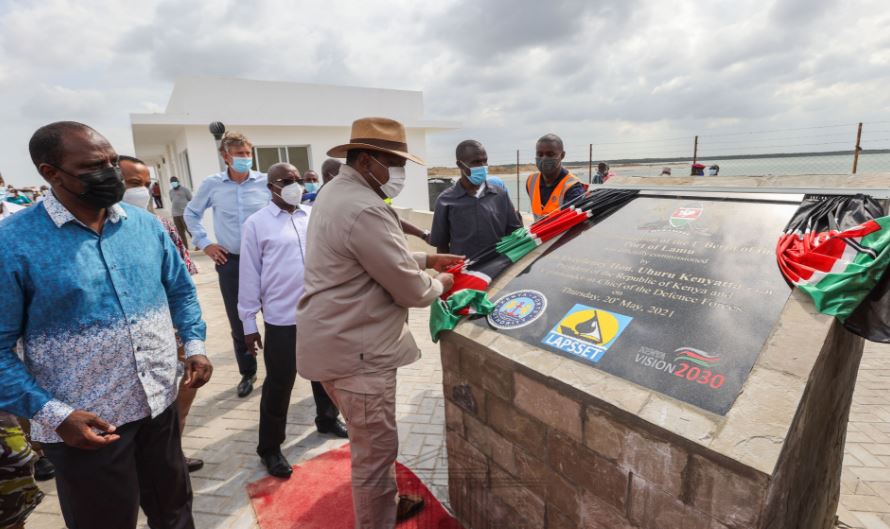 President Uhuru Kenyatta on Thursday, May 20 presided over the operationalization of the first berth of the new Lamu Port, marking a major milestone for the regional Shs 2.5 trillion Lamu Port-South Sudan-Ethiopia Transport Corridor project (LAPSSET) launched in 2012.

When complete, the Shs 310 billion port will have 32 berths, 29 of which will be financed by the private sector, making it the largest deep-water port in Sub-Saharan Africa.

On his way to the port, President Kenyatta stopped at Minjila in Garsen, Tana River County where he launched the Garsen-Witu-Lamu Road. The 114-kilometer road will facilitate the movement of cargo in and out of Lamu Port.

The President witnessed the docking of Maersk-operated MV Cap Carmel and MV Seago Bremerhavel, the first and second vessels to dock at the new port respectively.

MV Cap Carmel, a Singaporean container ship, docked at Lamu on its way from the Port of Dar es Salam in Tanzania to Salalah in Oman.

On the other hand, MV Seago Bremerhavel is hauling a cargo of premium Kenyan avocadoes from Kakuzi PLC, Makuyu Orchards in Murang’a County to France.

Speaking during the historical event, President Kenyatta said the new port will position Kenya’s economy on the continent and globally, aiding the country’s post-Covid recovery.

“As a critical pillar of the Lamu Port-South Sudan-Ethiopia Transport (LAPSSET) corridor project, this Port will connect South Sudan, Ethiopia, and Kenya. Eventually, it will connect northern Kenya to the Middle Belt of Africa; which runs from Dakar, Senegal in the west to Lamu in the east,” President Kenyatta said.

The President noted that Lamu Port is strategically located at the convergence of major shipping routes, saying its operationalization will open up northern Kenya to international trade, thereby fortifying the country’s position as a top economic gateway to Africa.

“With one of the deep-water harbours on the east coast of Africa, Lamu Port has the potential to become a premier transshipment hub for all cargo destined for the continent. Furthermore, Lamu now joins Mombasa Port as a key entry and exit point of cargo, deep into and out of Africa’s hinterland,” he said.

The Head of State said Lamu Port reflects Kenya’s boldness and clarity of vision as it strives to become a prosperous and newly industrialized, middle-income country by the year 2030.

The President said Lamu Port and LAPSSET form an integral part of the broader connectivity the Government is establishing through the Kenya Transport and Logistics Network (KTLN), an ambitious infrastructure blueprint that seeks to seamlessly link the country’s ports through railways and pipelines.

“In the next phase of LAPSSET, Lamu Port and northern Kenya, will be connected by rail and pipeline links, which will eventually reach Ethiopia, South Sudan and other regional States, with the final stop being Dakar in Senegal,” the President said.

President Kenyatta, who also commissioned the construction of the 470-kilometer Lamu-Ijara-Garissa Road that includes 214-kilometer ‘security roads’ to Baragoi and Kiunga, said the new infrastructure will create opportunities for Kenyan youth as well as address marginalization of some parts of the country.

“Lamu Port is intended to serve the upper Northern region of our country. The whole objective is to ensure the issue of marginalization is dealt with once and for all,” President Kenyatta said, pointing out that the seaport is of great significance to the East African Community and the African Union, as evidenced by the participation of South Sudan and Ethiopian leaders during the launch of LAPSSET in 2012.

Addressing wananchi at Kibaoni on the new Garsen-Witu-Lamu road, President Kenyatta said with the new port, roads and associated infrastructure, residents of Lamu should expect new employment and trade opportunities.

“Once this infrastructure is complete all residents of Lamu will enjoy better life as their fellow citizens elsewhere in the country. This new project will also offer job opportunities to our youth, thereby discouraging them from taking part in criminal activities,” the President said.

He cautioned the youth not to be lured into criminal activities especially radicalization and terrorism saying with the new project, they have a better future to look forward to. 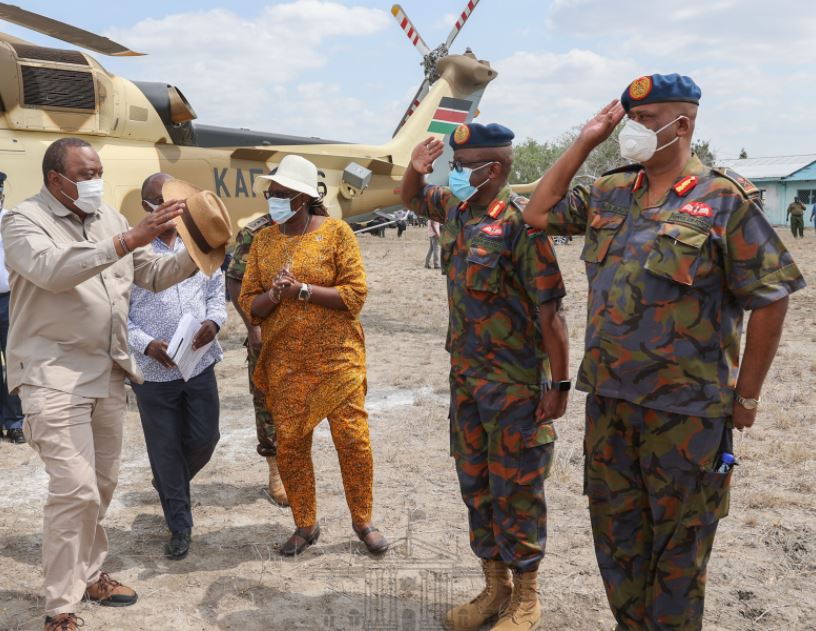 Prev1 of 13Next
Use your ← → (arrow) keys to browse
Kenya Receives Ksh212M Donation from Japan for COVID-19 Vaccine Roll Out < Previous
Football Scoring Next >
Recommended stories you may like: