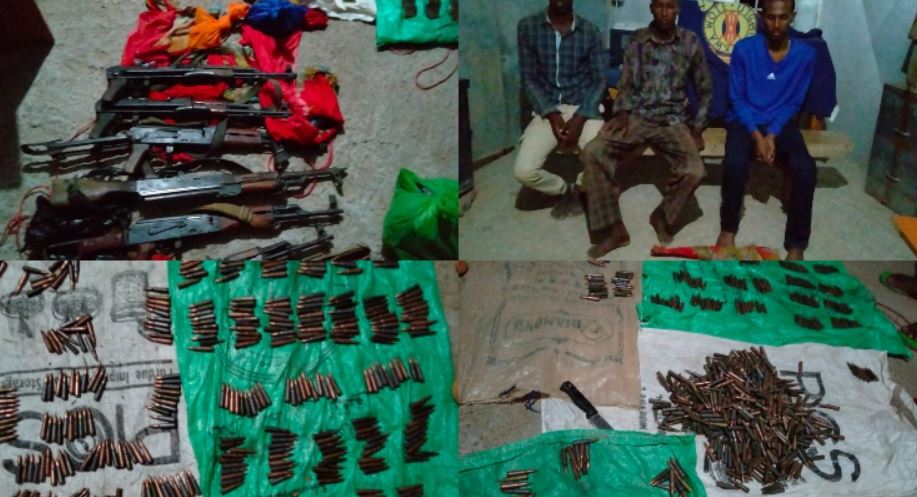 Three men suspected to be Al Shabaab militants were Monday arrested in Lagdera, Garissa County while in possession of an assortment of illegal weapons.

Lagdera police said that they were on patrol along the Baraki-Maalmin Road when they spotted the three men of Somali origin in a white Toyota Succeed car at around 5 pm.

When police commanded them to pull over their vehicle, the men sped off prompting a chase that lasted about four hours.

A multi-agency team of agents from the Critical Infrastructure Protection Unit and officers from nearby security stations in Mogodashe, Afweini, and Maalmini was deployed to track down the suspects.

According to a police report, two officers who were using their personal vehicle cornered the suspects about 40km south of the CCM Lagdera Police Station.

The men all had Kenyan identity cards. They were identified as Nur Ibrahim Alaso Hadadob (the driver), Jimale Abey Mahamad Griftu, and Abdirizack Mohamed Ali Elwak.

Detectives believe the weapons were to be used in a terror mission. North Eastern police boss Rono Bunei said they are investigating further to establish what the suspected Al-Shabaab militants were planning.

“These were transporting them for a terror-related mission here. We are on alert,” he said.

Police termed the arrests and recovery a win in the war on terrorism.