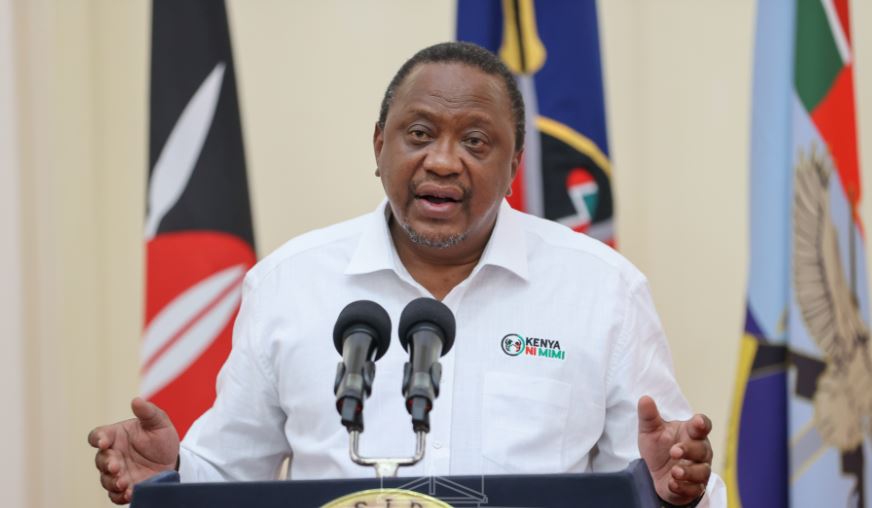 President Uhuru Kenyatta has maintained that he will not extend his stay in power after his term officially ends in 2022.

Speaking in an interview with Kikuyu radio stations, Uhuru said he is ready to serve Kenyans in any other capacity after his tenure.

“Let’s remain patriotic. Am not interested in power after my retirement, but am ready to serve the country in any capacity,” he said.

During the interview, Kenyatta told off critics of the Building Bridges Initiative (BBI), accusing them of engaging in petty politics instead of focusing on the long-term benefits of the initiative.

“My greatest worry is that instead of leaders looking at the challenges facing our people and how to resolve them, they are busy politicking about 2022 and claiming that BBI is about helping Raila. Where and when did I ever tell you that I am in this process for Raila? My interest is to achieve the promises I made to the Kenyan people, bringing them development and ensuring that they will never fight again,” he said.

“When the presidential election time comes, people will decide who they want, and we are watching keenly, and we will know who it shall be. But we must first ask ourselves what is important. Let us not bring in petty politics to tarnish a process that will yield results that will help our people in the long run. Let’s not bring in personal politics instead of focusing on justice and fairness, for the Kenyan people to ensure they get their rightful share of resources and development without worrying so much about who is in State House…that is what BBI is about, that is where I stand,” Uhuru added.

Kenyatta also mentioned that he is not bothered by insults from critics of the BBI.

“I am not worried about their insults, let them continue, but they should not try to incite people to chaos or stop ongoing projects. If they do, just like I said the other day, they will know a lion that is rained on is not a cat,” he cautioned.

Have Some Manners Or Return To Opposition, Ruto Tells Raila < Previous
Severed Head Of Girl Found At Witch Doctor’s Home In Suspected Ritual Killing Next >
Recommended stories you may like: