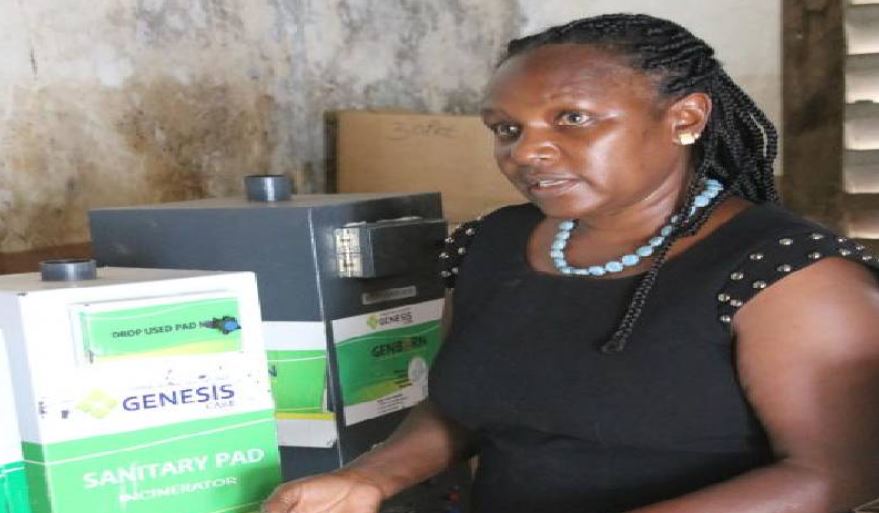 Catherine Mumbua and her husband Chege Wanjoya started Silmak as a family business in 1988, In the beginning, they worked with non-governmental organisations, taking blow after blow on their way to establishing a formidable business venture.

After a steady growth, they founded Genesis Care in 2015, a brand of Silmak Agencies that offers end to end menstrual hygiene solutions, and more.

56-year-old Mumbua talks about her journey and experiences.

I had worked with the Kenya National Chamber of Commerce and Industry (KNCCI) and was privy to how orders and procurement of goods happened. There were so many inquiries coming through KNCCI. When I quit and we started Silmak, we were taking orders for companies. But (she looks up thoughtfully) it was not easy. The first jobs were so tough we almost threw in the towel.

A European company needed us to supply French beans. We did not have the money to do it and told them as much. They opened an LC (letter of credit, also known as a documentary credit or bankers commercial credit, or letter of undertaking, which is a payment mechanism used in international trade to provide an economic guarantee from a creditworthy bank to an exporter of goods). The contract was worth $600 (Sh64,000). But we did not know how all this worked. We waited for the money only to be told that the money could only be released once we had supplied the goods. The deal did not go through.

The second time, a German company gave an LPO (Local Purchase Order) where they wanted us to supply sorghum and simsim to Sudan. The contract asserted that we could be surcharged for late deliveries. We could get sorghum in Kenya, but we had to go for simsim in Uganda. There, we met and dealt with a company that was anything but straightforward. Being green in business, we did not know how to navigate the situation and ended up getting the deliveries late. The contract was cancelled. We learnt never to bite more than we can swallow.

And Genesis Care? How did it come up?

My father was sick and bedridden since 2010. He needed adult diapers, and the good quality was available at Sh1,500 a pack. This was too expensive owing to the fact that a pack barely lasted three days. When I checked online and studied diapers made in China, I realised they were way cheaper. I spoke to some manufacturers and studied the specifications of making the diapers. Tired of buying them, I struck a contract with a manufacturer and, on my specification, we started manufacturing our own diapers from outside the country.

How was the experience in the new world of manufacturing?

Our first shipment was a whole container. A container is so big and carried so much. The problem was how to sell them all. With my son, we started touring hospitals and supermarkets to market them. My background as a marketer helped.

Did you get it easy in the market?

Not at all. Some of the big hospitals and supermarkets turned us away rather nonchalantly. We, however, continued lobbying for our products and managed to find a way into many towns. We were offering high quality at way lower prices, but the lack of straightforwardness in some of these institutions meant our products were barely welcome. One pack of Genesis Care adult diapers costs Sh750. See what I mean?

Yes. And what about the sanitary pads?

I grew up in Makueni and did not enjoy the privilege of using sanitary pads. In an effort to give back, I once went to my primary school and distributed sanitary pads. But I realised that was not sustainable in the long term. As such, we sought to manufacture our high-quality sanitary pads, which are actually cheaper, and also came up with a dispenser to sell the pads in individual pieces which were more affordable than buying the whole pack.

How does the dispenser work?

The coin-based sanitary napkin vending dispenser has a slot through which a user can deposit a coin and a pad will automatically dispense. The users need to deposit coins of Sh10, or Sh20, way less than the cost of the whole pack of sanitary pads off the shops. This creates employment for the owner of the dispenser and gives dignity to girls who can now go through their menstrual cycles without issue.

But we also realised that so many sanitary pads are dispatched by donors and never reach the girls. So we designed an automatic machine that we can lease to schools, then allocate each girl a unique pin, through which they can acquire sanitary pads from the dispenser. By keeping data on the frequency of pad use among individual students, we will then keep tabs on their menstrual health.

Those are concerns that we have addressed. We built an incinerator for these pads. It is a noiseless, electric machine that reduces a pad to a gram of sterile ash within minutes. A standard one, which could serve a school of 300, costs Sh75,000.

We also have a prototypical incinerator for diapers that works pretty much the same.

We exhibited at a Mombasa conference for heads of secondary schools and received an overwhelming endorsement for our dispensers.

Developed anything in the Covid-19 era?

Of course yes. We piloted a used-mask incinerator, funded by United Kingdom’s Royal Academy of Engineering, who gave us 5,000 pounds (Sh725,000). The machine can be automated and can burn down ten masks at a time, and produce sterile ash within moments.

Many years in business. What has kept you going?

At first, it was the children. They had to keep learning, and we had to keep providing for them. Now that they are fully grown, the desire to give back to society and make an impact among the less fortunate is a great driver. We are targeting to reach more girls in the country.

How many people does the company employ?

We have eight employees, but we outsource quite often and partner with interested parties. Of course, there are many more across the value chain.

How do you balance family and work?

Pulling together. Pulling in the same direction. The collaboration and unity of purpose among the family help us. We trust one another. We work as a unit as it is a family business. We will be passing the baton to the next generation very soon so we have to keep on training them and getting them more and more interested.

What would you advise a potential entrepreneur?

Failure is a very crucial part of the business. There are a lot of lessons to learn about failure. You cannot progress without failing first. But never giving up is what distinguishes those that make it from those that never make an impact. Fall. Learn where you tripped. Dust yourself up. Don’t make the same mistake in future. But by all accounts, keep trying. Keep moving.

My Hustle – I Started Seedlings Farm With Just Sh15,000 < Previous
Meet Fitness and Wellness Coach Isaac Hunja, Founder of ‘Hunja Active’ Next >
Recommended stories you may like: