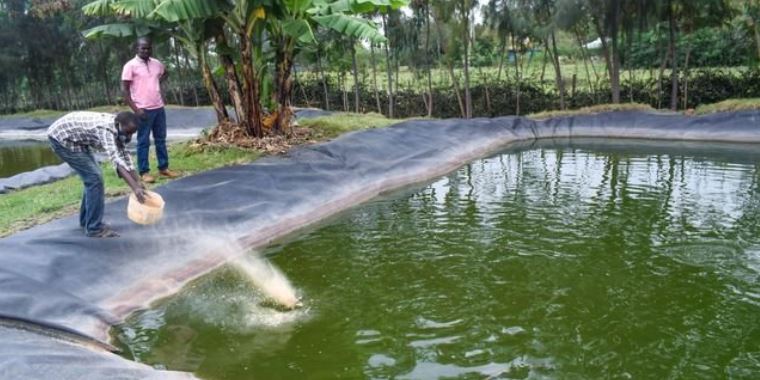 Joseph Ouda is a retired security officer, who farms fish in three out of his six ponds in Alendu, Kisumu County. He spoke to ‘Seeds of Gold’ about his ‘hustle’.

What kind of fish do you keep?

I have both tilapia and catfish. It is always advisable to rear the two together for population control.

Catfish feeds on young tilapia effectively keeping them under control thus one ends up with fish of good size. The fish are in both earthen and dam liner ponds. I started the project 12 years ago out of luck.

I bought land whose previous owner had a pond. So when it rained, fish would come from River Nyando when it floods and settle in the pond. I decided to widen it and add some fingerlings. I sold some of the fish to neighbours and saw the viable business in the project.

You then chose to expand the venture…

I invested Sh40,000 from my savings in 30 by 10m ponds, which I stocked with 2,000 catfish and later 1,000 tilapia fingerlings I bought from Lake Basin Development Authority hatchery in Kibos at Sh6 each.

The earthen pond currently has 700 catfish while the other two ponds have 800 and 700 fingerlings.

How do you take care of the fish?

Currently, my son, Dennis Asuna, manages the three ponds with the help of a worker. The fish are fed twice a day, in the morning and evening.

We used to buy commercial feeds but we now formulate our own feeds from lake shrimp and rice bran. At times we give them ground omena.

Fresh water is regularly pumped into the ponds from a borehole for better fish environment. The amount and pressure of water flowing into the ponds need proper regulation so that the fish gets enough aeration and oxygen supply needed to support their growth.

We sell the catfish and tilapia at Sh300 per kilo depending on the size to fish mongers in Kisumu.

We initially had challenges but we now break even after working with agricultural experts, who have enabled us master the best practices for profitable fish farming. We earn up to Sh400,000 per harvest, which comes after about seven months.

You are in an area where floods are rampant, how do manage the fish ponds?

Perennial flooding of River Nyando has forced us to scale down the business. Few months ago, I lost some 3,000 pieces of fish to floods.

Sometimes the flooding starts at night making it hard to save the fish. To manage the problem, I have now raised dykes and installed several outlets so that excess water can leave the ponds faster.