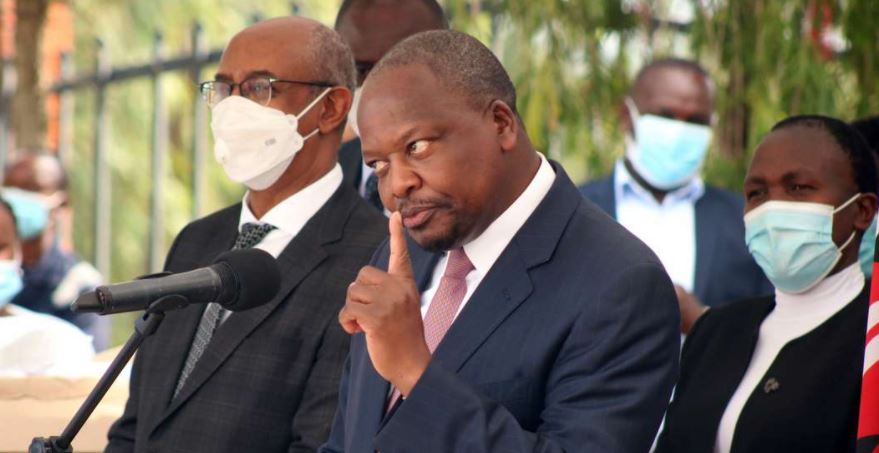 Health Cabinet Secretary Mutahi Kagwe on Wednesday said all signs indicate that the coronavirus infection curve has been flattened.

Kagwe said over the last month, Kenya has recorded a positivity rate of below 5%, meeting the World Health Organization (WHO) threshold of a flattening infection curve.

“In the course of this month except for a couple of days we have been on a positivity rate of below 5%. The WHO proposes that when you can run a below 5% positivity rate for over 14 days then as a nation you have began to flatten the curve,” he said.

Kagwe, however, cautioned against laxity in observing COVID-19 containment measures saying there is a risk of a second wave of infections as observed in European countries.

“Let me caution that even as we do so(flatten the curve), events elsewhere across the globe indicate a new wave of COVID-19 cases. If you look at what is happening in the UK, Spain, Italy, Germany, France and other countries in Europe then we have no choice but to be cautious for that second wave that is always a possibility,” he said.

Health Ministry Director General Dr. Patrick Amoth echoed his sentiments saying in addition to the positivity rate of below 5%, a significant number of patients had been discharged from hospitals in the last two months.

“Over the last 21 days, our average has been less than 5% apart from one or two days ago. We also look at the number of patients who are admitted for institutional care. As of today we have just 484 patients with COVID-19 in all health facilities from 1,200 more than two months ago. As of today(Wednesday) we only have 14 people in ICU under critical care; four of them with ventilatory support the remaining 10 on supplementary oxygen,” said Dr Amoth.

“We are not noticing excess mortality at the community level. Critical surveillance on facility level has not generated any evidence to indicate the cases we are seeing are from the community. We are past our inflection point but we should not throw caution to the wind because we can easily reverse in terms of the progress we have made.”

Five more patients succumbed raising the total fatalities to 664 while the number of recoveries rose to 24,253 after 106 patients recovered from the virus.

SportPesa CEO Ronald Karauri: I Think Uhuru is Being Sabotaged on Betting Taxes < Previous
Mobile Trading Platforms and Commodities Apps Next >
Recommended stories you may like: