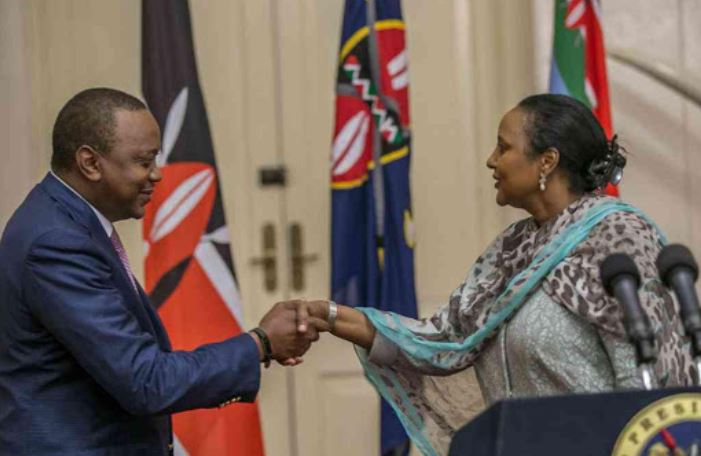 Kenya’s Cabinet Secretary for Sports, Heritage and Culture of Kenya, Amina Mohamed, is among eight candidates vying to become the next head of the World Trade Organization.

Ms Amina was one of three contenders who entered the race just before the close of nominations on Wednesday. She will be seeking to replace Brazilian Robert Azevêdo, who will be stepping down a year early at the end of August.

Amina, a former Kenyan ambassador to the WTO and the first woman to chair the WTO’s General Council in 2005, had contested against Mr Azevêdo in 2013 but lost out on a decision made by consensus among member states.

The candidates will now meet with the WTO General Council to make pitches and respond to questions. The Council will meet from July 15-17 to hear their presentations and quiz them on their plans for the global trade body.

Kenya’s Head of State, Uhuru Kenyatta, on Thursday gave a glowing recommendation of Amina Mohamed ahead of the World Trade Organization vote, describing the former Foreigh Affairs Minister as a “master consensus builder” uniquely qualified to lead the WTO at this critical time.

President and Commander in Chief of the Kenya Defence Forces

On the candidature of Amb. Amina Mohamed for the position of Director General of the World Trade Organization

“On the 7th of July 2020, the Republic of Kenya submitted the candidature of Amb. Amina C. Mohamed for the position Director-General of the World Trade Organization (WTO).

“The World Trade Organization promotes trade for the benefit of all countries. It is the only institution that provides a unique forum for trade negotiations and for the settlement of disputes among its Members. It is in fact the only platform for the integration of developing nations into the world economy.

“As a firm believer in the strengthening of international multilateral institutions, Kenya is convinced of the urgent need to revitalize the WTO to better serve the needs of all nations, large and small. We also believe that it is time that Africa took up her responsibility of serving at the helm of WTO.

“Kenya offers Amina C. Mohamed, a uniquely qualified person, to lead the WTO at this critical time. If selected, she would be the first African and indeed, the first woman to serve at the helm of the World Trade Organization.

“Minister Mohamed understands the WTO, understands its processes, having chaired all its high-level decision-making bodies. For example, the Ministerial Conference, General Council, Dispute Settlement Body as well as the Trade Policy Review Body.

“The length and breadth of her experience with the WTO and the multilateral trading system combined with her extensive track record in international relations and her political experience, I believe is unparalleled.

“She has devoted a significant part of her professional career in championing the benefits of trade as the way to alleviate poverty and improve living standards not only here in Kenya but across the world.

“Amina Mohamed has served this nation greatly across several ministerial portfolios. She served as the Minister for Foreign Affairs and International Trade. She has also served as Minister for Education, Science and Technology and is currently serving as Kenya’s Minister for, Sports, Culture and Heritage.

“These over and above many other Senior Governmental jobs as Ambassador, Permanent Secretary and many other portfolios that she has held in the past.

“It should also be noted that Minister Mohamed chaired the 10th WTO Ministerial Conference that was held here in Nairobi and that was highly successful. And that, she is the current President of the 14th United Nations Conference on Trade and Development.

“From a personal perspective, my experience working with her over the years and watching her work with others has convinced me that she is an effective leader and without doubt, a master consensus builder. She listens to advice and works hard always to find common ground.

“I have no doubt in my mind that her leadership at the WTO will without doubt be a game changer, that will enable this important institution to meet the requirements of its Member States and to better address the evolving demands of the 21st Century, and this, led by a proven consensus-builder.

“Owing to her outstanding credentials, I do again strongly believe that Amb. Mohamed will enjoy broad support from countries across the world, with our pledge as Kenya not only to support her but to continue working closely with all countries on the African continent and across the globe to build consensus and a truly meaningful multilateral trade platform that every single country can benefit from, and I thank you all.”