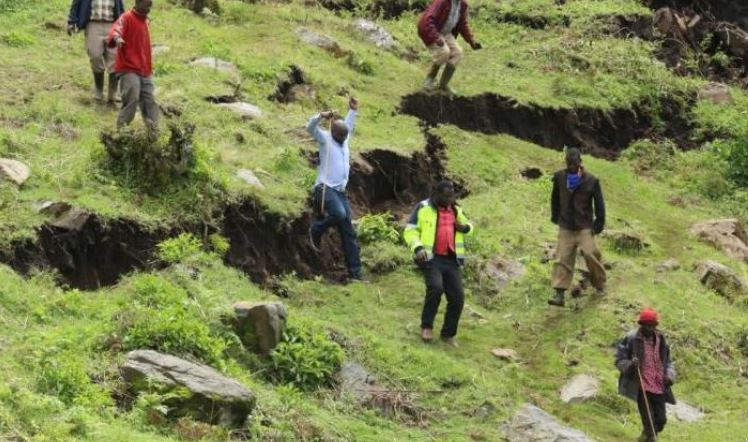 Deep cracks along the slopes of Kerio escarpment in Elgeyo Marakwet County have sparked panic among locals.

On April 18, landslides hit Kiphumwa, Liter and Chesegon areas on the border of Elgeyo Marakwet and West Pokot counties killing 18 people. 17 others have been reported missing.

The administrator said at least 175 people are camping at Kipyeigor Primary school after they narrowly escaped death during the weekend landslides.

Elgeyo Marakwet Deputy Governor Wesley Rotich said: “Dangerous cracks have occurred in various parts of our county that include Anin in Keiyo North, Katilit in Marakwet East, Mugomet and Kapsegut in Keiyo South sub County. We urge those living in places prone to landslides to move to safer places to avert more danger.”

“We thank the local leadership for advising the people to move immediately the cracks are witnessed,” he added.

He said rumbling and shaking was heard before a huge section of land moved down the slopes.

“Luckily, it never buried houses. But it completely cut off the road linking Keiyo North and Marakwet West,” he said.

Elgeyo Marakwet County Commissioner Ahmed Omar said over 2o0 families from Elgeyo Marakwet have been listed for permanent resettlement in an ongoing exercise.

“About 250 displaced families are currently receiving food aid in camps. We have asked locals in high risk areas to move out. Others are living with relatives in safer areas,” he told Standard.

County meteorological department officer Simon Cheptot warned that heavy rainfall is set to continue into next week and may trigger run-offs in the escarpment.

Meet the 22-year Old Forex Trading Expert Running a Multi-million Shilling Empire < Previous
Forceful Evictions in Flood-hit Areas Begin As Govt Announces Relief Fund For Those Affected Next >
Recommended stories you may like: